Alice M. writes: I have a 1943-P Nickel. On the date there is what looks like a 2 under the 3. Can you tell me if this is possible and if so what is its’ value.

The 3 over 2 variety of the 1943 Philadelphia nickel is the most valuable of the eleven issues of the Wartime Alloy Jeffersons. The coin brings anywhere from $50 to about $500 depending on condition (grade). It is easier to sell if you have papers of authenticity or have it encapsulated. You can have the coin authenticated and graded by PCGS or NGC.

Does a counterfeit coin have any value?

Bill F. writes: I have a 1927 $2-1/2 Dollar Indian Head gold coin in very good condition. I took it into a dealer 20 years ago and he said it was counterfeit. Does a counterfeit coin have any value?

A counterfeit or fake coin doesn’t have any numismatic value though it’s gold or silver can be extracted by assay. U.S. fakes are technically illegal to own. There are various motivations to counterfeit coins not all of them sinister.

For example, the Beirut Mint in Lebanon and some mints in Latin America made counterfeits of European and United States gold coins in the early part of the 20th century. Since the coins they were reproducing were essentially “trade units” they rationalized that they were making their gold into recognizable entities and therefore acceptable for trade. This practice was certainly not acceptable in those countries that were the victims of this fraud. The practice continued long after gold stopped circulating since authentic gold coins had developed a premium over their face value and were of interest to collectors.

I once saw a bag of 1000 “Great Britain Sovereigns”. These coins should contain .2354 ounce of pure gold each (slightly less than a 1/4 ounce). The counterfeiters chose a rare date, 1917, to place on each of the coins. The insult to injury was that the coins contained less than half the gold content of a legitimate sovereign.

Most numismatists study counterfeit detection at some time in their careers and the old Beirut dies are usually the starting point for learning this skill. There are several techniques for copying coins including:

Authentication is a careful science and one learns not to condemn a coin unless the diagnostics tell us otherwise. It’s possible your coin might be genuine.

I think that the most important task for numismatists is to learn is what genuine coins should look like. You are then less likely to be fooled by a fake.

What or who determines a coin’s current price?

Jo Ellen G. asks: How do I discover the value of silver dollars that I have? What or who determines a coin’s current price?

The question of how to determine what the coin market perceives as the value of coins and paper money is an important one. The market can be divided into several segments that include major Market Makers in each. A Market Maker is a company or individual who is willing to buy and sell the same or similar items at a fixed price in time. The spread between the buy and sell price is the potential profit that the dealer can earn.

Since markets are fluid, that is they change constantly, the Market Maker gambles that his “spread” reflects the market exactly at that moment. As this is becoming a economics lesson and beyond the scope of this column, suffice to say that this is where the price begins.

Some examples of coin market segments:

Auction catalogs, trade newspapers and the internet report at what prices the Market Makers assign to various coins. You’ll notice that the coins are listed by date, mint mark and grade. When you evaluate your coins remember that the combination of these factors along with how scarce the coin is in relation to collector demand, all come together to determine price.

David P. writes: I have a columbian half dollar commemorative coin. 1893 chicago worlds fair columbian exposition. Was wondering if it had any value. Thank you, Dave

Yes, it is worth more than face value. Average circulated pieces bring about $10-$15. Columbian Exposition half dollars were made in 1892 and 1893 and both were sold as souvenirs for $1 at the exposition. The show opened a year late and that is why there are two dates for this coin. There were 950,000 1892 and 1,550,405 1893’s minted. It seems that not very many were sold at the Fair. Fair-goers balked at paying one dollar for a fifty cent value coin. I guess many of them thought double face value was too high a price to pay.

Years later, the remaining coins were released to U.S. banks at face value; that is the reason there are so many circulated examples. While circulated example values languish at about double their melt value, high quality (MS65 or better) uncirculated specimens are quite scarce and worth hundreds of dollars or more.

Jason M. writes: My mom brought over a Thomas Edison fifty year commemorative brass coin that my dad had saved. It is slightly larger than a quarter. Here are the details:

There seems to be quite a lot of medals honoring Thomas A. Edison in 1929. It appears the 50th year anniversary of the incandescent lamp didn’t go unnoticed around the world. Edison was quite a prodigy inventor. He was responsible for more than 700 electrical inventions including the phonograph as well as the light bub.

I’m not familiar with this particular piece, but generally the small size ones go for around $25 or so. You might try looking at the edge to see the minter. Medallic Art Co. pieces from this era are popular.

I am familiar with a 1929 Argentine Medal that was minted for the same reason and shows up in auctions every once in a while. This is a large piece 71.3mm, that is almost 3 inches in diameter and is very artistic. It shows a bust of Edison facing half left and on the reverse, a nude female figure holding an electric light soaring above a nude male figure who has just dropped his torch. Quite a interesting and spectacular design. Value: about $150.

Jennifer S. writes: I am interested in knowing where this coin came about and the worth of it. I believe it is very rare. This came from my family’s rather large gold coin collection but I did not find it with the collection. If you could give me some idea as to either its worth or how to find out it’s worth. The only thing I have found is that it is a rare piece. Thanks Jen

This is a copper reproduction of a Baldwin $20 gold piece. Baldwin & Company was one of the jewelry companies in the San Francisco area that produced coins during the early days of the California Gold Rush (c.1849-1857). Baldwin & Co. bought their minting equipment from Kohler & Co., an assaying company, in May of 1850. California in 1849 was part of the large area of what is now the United States Southwest that had been recently ceded from Mexico. There was no coins for commerce, no United States Mint and national paper money wouldn’t come in to existence until 1861. Even then, paper wouldn’t be readily as acceptable as coins for almost half a century into the future.

When large quantities of gold were discovered, a huge migration of people gathered in California to search for the yellow metal.

Goods and services were a great business to be in but for merchants, receiving payment was haphazard and consisted of Spanish 8 reales, 8 escudos, gold dust and some Federal coins. Local minters supplied coins of guaranteed weight and of specific value. They made their money on a small amount of seignorage, that is, payment by making the coins gold content slightly less than the face value.

Not only were high denomination coins struck but many jewelers struck fractional gold coins, that is coins with denominations of less than one dollar.

Because of the historical reference, California gold coins from any of the private minters are highly sought after and are quite valuable. Only a small quantity remain and, in some cases, examples are unique.

Baldwin & Company’s $20 gold pieces were the first coin with that denomination struck in California. Average circulated Baldwin $20 gold pieces can bring more than $80,000 when offered for sale at auction. However, only genuine coins are valuable. The image that you sent along with your message is of a cast replica in base metal. This copy was not made to deceive, the design work is too crude for that, and it isn’t struck on a gold planchet but it makes a very good “museum” souvenir to show students of the era the coin’s approximate design.

What’s on the back of an ordinary dime? 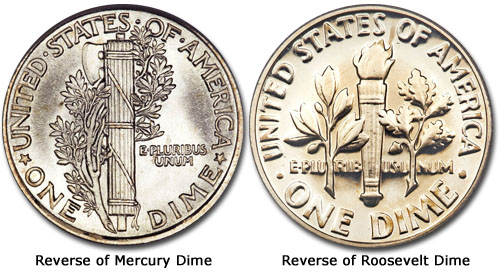 MJJ asks: Please explain the image that appears on the back (tails side) of an ordinary dime. It’s driving me crazy. What are the plants/flowers? why are they there? what is the significance of the torch? Thanks.

The Roosevelt dime’s reverse was an evolution of the Winged Liberty Cap dime (commonly called  the Mercury dime). The Mercury dime design was created just before the United State’s entry into WW I. The reverse design shows the Roman fasces which consists of an executioner’s axe bound to a bundle or rods or sticks. The symbol represented the power of life or death and was a strong, belligerent statement very much like “Don’t tread on me” or “Beware enemies of Liberty”.

In Ancient Roman times it represented the power to kill mercifully by the axe or slowly and painfully by the rods. Unfortunately, the faces symbol also became the symbol of the Italian Fascists, the Blackshirts, in the 1920’s. Americans seemed to have missed this association and the Mercury dime stayed unchanged until 1945.

When President Franklin D. Roosevelt passed away, he was commemorated on the dime and his bust replaced the Winged Liberty motif. It was also an opportunity to eliminate the faces in favor of a Liberty Torch with the bundle of rods making up the base. The vegetation is an olive branch representing peace.

Mark M. writes: My aunt was going through some of her late husband’s papers, and found a book from the post Civil War period on the Michigan 3rd Cavalry, privately published, which listed all the members of the unit (including my uncle’s grandfather)…pressed between the pages was a CSA $10.00 bill, 1864, Richmond, signed by Treasurer Allen (I think), nearly perfect condition (it had been in that book since the War). She asked me to find out its worth, if any…could you help me with a ball park figure? She’s pretty excited, but I told her not to get her hopes up too high. any help would be greatly appreciated…cheers, Mark

I think the book is worth far more than the CSA $10. Uncirculated examples of this type, less than $50. The book, I’m certain, would bring a great deal more.