Throughout the ages, the lure of gold has motivated man to brave almost any hazard in its quest. So it was again in California in 1848 when the greatest gold rush in U.S. history began with John Marshall’s discovery on the American River. Thousands of modern Argonauts suffered the rigors of arduous journeys “around the Horn,” through deadly Panamanian jungles or treks across the North American continent. Nothing of this magnitude had been experienced before. But so much gold came out of California that the precious yellow metal’s price fell sharply against that of silver, resulting in what little silver coinage there was disappearing from circulation. In the mining communities, however, with the unprecedented influx of wealth seekers from around the globe, the problem was even worse. Although there was plenty of money around—in the form of gold dust and nuggets—an acute lack of coinage hampered commerce at every turn. 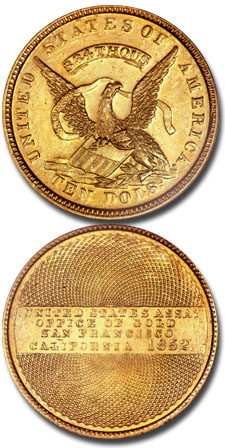 A similar situation existed in all the other early American gold mining regions, both before and after the California strike. Despite their vast geographical differences, in all these areas it was hazardous and costly to transport gold dust to the east coast for assay and coining. Local economies were based largely on barter or the use of “pinches” of gold dust, a notoriously inaccurate method. Branch mints were sorely needed, but the federal government, due to a combination of indifference, politics and sectional rivalries, refused to authorize a mint for any of the gold mining areas. While the U.S. Constitution expressly prohibited the states from issuing their own money, there was no law against individuals doing so. Into this void stepped numerous private firms, each producing coins and ingots known to numismatists as pioneer or territorial issues. By the end of 1849 there were approximately eighteen such companies in California, almost all located in the San Francisco area. Norris, Gregg and Norris was the first of these concerns to issue coins. Norris produced five-dollar coins, and virtually all of these were minted in Benicia, although inscribed San Francisco. Only two pieces survive today that were struck in Stockton. Norris fives are scarce, but occasionally an XF or AU specimen will appear.

No doubt the most important name among the early private California issues was that of Moffat & Co. John Moffat and his three partners began striking five and ten-dollar gold coins in 1849 and continued until the end of 1853. Moffat’s reputation remained unimpeachable throughout the era, and its coins passed at par with federal coinage, the only privately minted coins to do so. When the company finally closed its doors in December, 1853, its equipment was purchased by the San Francisco Mint. Rare in mint state, Moffat coins are generally found in circulated grades.

The only other firms among the early issuers of California gold whose coins are occasionally seen today are the Miners Bank and Baldwin & Co. Miners Bank ten-dollar coins were crudely manufactured, struck using the ancient hammer method, as coining presses were unavailable at the time. Baldwin & Co. issued fives and tens in 1850, adding twenties the following year. Other gold coin issuers in 1849-50 include such names as J.H. Bowie, Cincinnati Mining & Trading Co., Dubosq & Co., Massachusetts and California Co., J.S. Ormsby, Pacific Company and Shultz & Co. Surviving examples from all these firms are great rarities today, not because so few were struck, but rather because of widespread melting in the early 1850s. Interestingly, their high attrition rate is almost solely attributable to one man, James King of William.

King was a banker, originally from the Washington, D.C. area, who gave himself the title “of William” to distinguish himself from several other James Kings in the region. In March, 1851, King sent a group of private territorial gold coins to Augustus Humbert, United States Assayer at the time. The assay showed that the coins contained 97-99% of their stated value. King sent the results to the local newspapers, and the negative publicity created a panic. Local bullion dealers and bankers, including King, refused to accept most private coins for more than 80 cents on the dollar. Many people sold at this ridiculous price. King and others fortunate enough to purchase pieces at this deep discount made huge profits by reselling the coins to Humbert who turned them into $50 Assay Office “slugs.” The coins specifically targeted by King’s assaying scheme were from the three firms of Baldwin, Schultz, and Dubosq, but all the other private concerns (except Moffat) suffered from guilt by association, and their coins were widely melted. As a result, most early California territorial issues are extremely rare.

Although Congress failed to authorize a branch mint for San Francisco, in 1850, as a stop-gap measure, it approved an Assay Office in its stead. The government contract to produce fifty-dollar ingots was awarded to Moffat & Co. with Augustus Humbert as U.S. Assayer. In 1851, the management team of Moffat and Humbert struck the impressive octagonal fifty-dollar gold pieces with their “engine turned” reverses. After James King’s intrigues effectively stopped further private production of small denomination coins, in March, 1851, Moffat petitioned the federal government for permission to issue pieces smaller than the fifty-dollar “slugs.” For political reasons, permission was at first denied, as this would have turned the Assay Office into a de facto mint. The following year, however, the Treasury Department relented, and the Assay Office minted ten and twenty-dollar coins in 1852 and 1853. After Moffat retired in February, 1852, the Assay Office contract was taken over by his former partners, Curtis, Perry & Ward. In December, 1853, the U. S. Assay Office was closed to make way for the new San Francisco Mint. Unlike the other private issues, the semi-official Assay Office coins never suffered from widespread melting, and many examples survive to this day. At one time, two collectors, George Walton and John A. Beck, each accumulated more than one hundred of the fifty-dollar “slugs.”

The lack of refining acids on the west coast was a consistent theme for all California gold producers. Because of the naturally occurring high gold content found in California ore, most Gold Rush coinage was struck without alloy. This produced coins that varied in fineness between 850 and 925 thousandths. The U.S. Mint, however, could not tolerate a variable standard: by law, U.S. gold coins had to be .900 fine. But the lack of parting acids necessary to operate a branch mint delayed that institution’s opening until 1854, and even after production officially began, coining operations were periodically suspended when refining acids became scarce again. The daily needs for coinage continued, however, but by 1854, most small denomination gold coins had been melted. Into this void stepped two highly reputable firms, Wass, Molitor & Co. and Kellogg & Co.

Wass and Molitor were two Hungarian immigrants who established an assay office in San Francisco in 1851. With a reputation for scrupulous honesty second only to John Moffat’s, the two men issued five and ten-dollar pieces in 1852. When the Assay Office and later the federal mint began striking their own gold coins, Wass and Molitor ceased their coining operations. But when the newly opened mint failed to produce enough coinage to satisfy demand and then closed in 1855 because of a lack of parting acids, local bankers and merchants petitioned the firm to resume production. Obliging, they issued ten, twenty, and fifty-dollar gold pieces in 1855. Although the San Francisco Mint rated the coins from Wass, Molitor at full face value, most were nevertheless melted and converted into federal gold. Today Wass, Molitor pieces are among the most highly coveted of all territorial issues.

Another individual asked by local bankers to produce coinage was John Kellogg, a former cashier for Moffat & Co. While only in operation for two years, 1854 and ‘55, Kellogg & Co. produced more than six million dollars in gold coinage. Today, the Kellogg twenties are among the more available California territorial issues. This is due in part to the large number produced, but also because of a hoard of 58 pieces found in Thayer County, Nebraska in 1907. Allegedly, two ranchers hid the coins while being pursued by hostile Indians in 1867. They were presumably killed, as the coins were found by two boys playing in the woods near Alexandria, Nebraska forty years later. Most high grade Kellogg twenties known today come from this hoard.

The few territorial gold issues that survive today are token reminders of a pivotal time in U.S. history, a time when initiative in the private sector was absolutely necessary for economic survival, and even the simplest monetary requirements had to be met locally rather than by a federal government thousands of miles away. While the private firms lasted only a few years, the crucial function they served in people’s everyday lives made development possible and aided in the economic growth of the nation at large. The final curtain came down on private coinage with Congress’ passage of the Act of June 8, 1864. Intended to stop the minting of Civil War tokens, this legislation prohibited the private manufacture of any coins designed to pass as money.