Gary B. writes: I have a coin that I am guessing is from spain or mexico, based on the information that I have aquired so far. The following is what is on it. stamped on obverse ‘PHILLIP.V.D.G.HISPAN.ET.IND.REX’, crowned shield stamped on reverse ‘VTRAQUE VNUM / 1745’, two globes crowned between the pillars of Hercules. My question is simply to find out as much information as possible and find out the value of the coin. 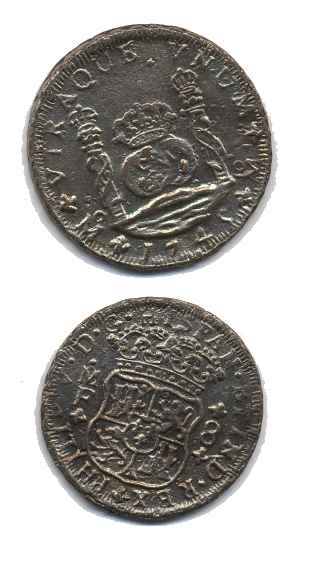 The coin looks like a sea salvage piece. It appears to be an 1745 Pillar Dollar (8 reales) struck at the Mexico City Mint under Spanish rule (MÂ° mint mark, MF -assayer). Pillar Dollars were minted all over South America from 1733 to the end of the 18th century when they were replaced by 8 reales featuring the portrait of the current Spanish King (These were known in the Americas as “Portrait Dollars”).

Generally, condition is an important component of value. Some sea salvage pieces transcend this requirement if they can be attributed to a specific important shipwreck. For example, coins from the Atocha (1622) are worth far more than similar unattributed pieces because of their association with this famous shipwreck. Without the attribution the coin has to stand on its merits.

Pillar dollars in damaged condition, similar to this piece, bring about $20-$25 or so in the numismatic market place. 1745 is not a particularly rare date for a Mexico City piece. Coins grading EF (Extremely Fine – non-sea salvage are worth about $125).