K.K. writes: I found some old indian rupee coins dated 1789 and 1792. They appear to be silver and have a picture of queen victoria on the front and the depiction 1 indian rupee on the back. now, i gave them to my daughters as a memento of their time in india. i wondered if they might be worth anything. i bought them in a aden, yemen and i was suprised to find them in this ratty old shop. could they be original coins or copies printed later in the middle east. 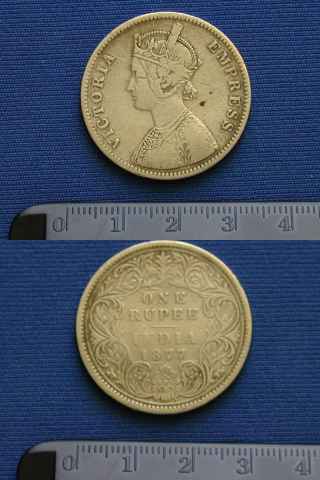 Queen Victoria didn’t become queen until 1837 so coins with Queen Victoria dated 1789 and 1792 can’t possibly exist. The image that you sent is of a genuine 1877 India (British) silver one rupee that grades Fine. The coin shows a crowned bust of a young Queen Victoria facing left. The reverse shows ONE RUPEE and the date below. The coin was struck at both the Calcutta and Bombay Mints and about 130 million pieces were struck at both Mints. The coin contains 11.66 grams of .917 silver (.3438 troy ounce pure).

Pieces grading Fine sell for about US $10.