Bryce writes: I came across an old silver coin in a thrift shop and would love to know what I have. The coin is silver with a smooth edge. It is very circular and measures 35mm across. On one side I’ve found the following marks: a shield in the center/bottom with a standing lion in the upper right and lower left quadrant and a castle in the upper left. In the center of the shield is another shield like shape with a, well, goalpost shape (best I can do). To the right of the shield is what looks like a + over an 8 then another + below it. On the left of the shield it looks like M over an F over a +

Around the perimeter of the coin are the following letters in order (* REPRESENT A BLURRED CHARACTER THAT IS THERE): PHILI* (A BLURRED SPACE) D HISPAN** *IND R BXV (THEN RETURNS TO BEGINNING) The ‘back’ of the coin is very blurred. There is some unreadable/barely readable text on the back perimeter.

In the center is some shape. There are two heavy vertical lines on each side of what can only be described as a leaf shape across the top of them. Under the ‘leaf’ is a shape sorta like an old crown (I may be reaching here) but that’s the best I can describe it. 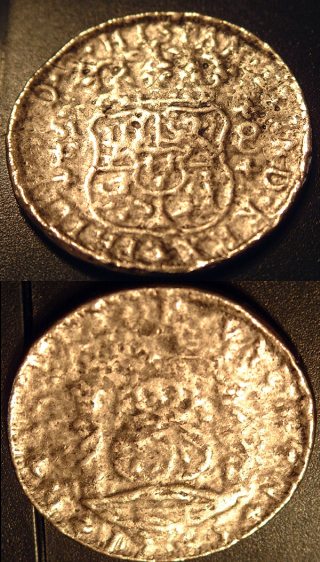 The coin is a 8 Reales also known as a Pillar Dollar because of the design’s incorporation of the Pillars of Hercules. The United States silver dollar was modeled on this coin’s standards. Pillar dollars were recognized and accepted throughout the Americas and over most of the world as acceptable money.

The coin is described as following: Obverse: Crowned Shield over the arms of Spain showing alternating lions and castles representing Castile and Leon in Spain. The assayer initials (MF) is to the left of the shield and the denomination “8” is to the right. The abbreviated Latin legend around is PHILIP V. D.G. HISPAN. ET IND.REX (Philip V, By the Grace of G-d, King of Spain and the Indies).

Reverse: The international theme is hard to miss. Two worlds, representing both hemispheres of the earth are crowned and between the Pillars of Hercules, the mythical limits to the world. The banners on each pillar have the words Plus Ultra – more beyond. The motto around, VTRAQUE VNUM (utra que unum) means “Both are one” and refer to the two hemispheres.

Your coin is a sea salvage piece, most likely from a contemporary ship wreck. By condition the coin wouldn’t be worth much ($5 or so) but often such pieces are related to a specific wreck making the coin more symbolic as a artifact but the link to the specific shipwreck is vital for the coin to take on that kind of role.

High grade Pillar Dollars are available in the numismatic market at very reasonable prices. A common date from this era can be purchased from between US $50 and $200.

Jan 2, 2014coindoc
Is it rare or is it just bullion?"Counterstamped" Morgan dollar