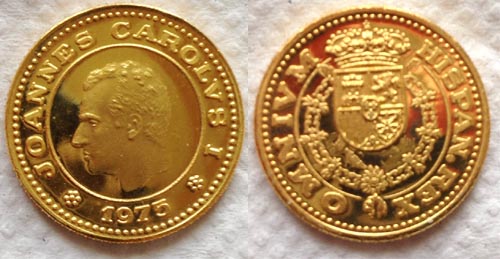 It appears to be a modern token made of base metal with gold plating. It depicts Juan Carlos the First, since 1975 the King of Spain.

Obviously based on the 50 pesetas 1975. At that time, there were two factions in Spain. The Francoists trusted Juan Carlos to continue Franco’s nationalist policies after his death in 1975. He gave them no reason to think otherwise. This medal was undoubtedly issued by Francoists. The opposition were the Carlists, supporting Carlos Hugo, a reactionary conservative.

The medal is interesting, because Juan Carlos, once firmly in power, enabled democracy and withheld support from an attempt by renegade officers to install a new military dictatorship.

It is not possible to assess the metallic content of the medal from a picture. Maybe a friendly jeweller can help.