Stanton W. writes: I’ve seen a few Civil War era slave tokens but they all had numbers and some had holes. This one looks entirely different. So what is it? Can you fill me in on some background information on this coin (or is it a medal or token)? 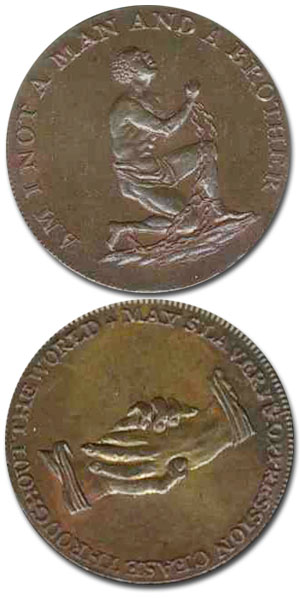 No, it’s not like the slave tokens you remember and it’s not even from the United States. This is a British Anti-Slavery halfpenny token (circa 1795) modeled after a 1787 medal designed by English potter and fervent abolitionist Josiah Wedgewood. The obverse displays a kneeling negro pleading, “AM I NOT A MAN AND A BROTHER?”, while the reverse shows clasped hands with the motto, “MAY SLAVERY AND OPPRESSION CEASE THROUGHOUT THE WORLD” around the periphery. Made of copper, this token was issued by the heavily Quaker influenced British Society for Suppression of the Slave Trade. The powerful imagery of this piece was adapted years later on a very rare 1838 U.S. Hard Times token.

By 1788, the abolitionist movement in England had substantial influence. That year the British House of Commons passed a bill that limited the number of slaves a ship could carry. In the following years, further bills were introduced and finally, in 1807 slavery was abolished. By 1834, all slaves throughout the British colonies were free.