Thomas G. writes: Dear Coin Doc, I cannot find any similar coin on the web, and am not even sure which country it is from. Dated 1703, showing 3 crowns and a large C with Roman numerals Xii and laurels, the reverse is showing the date and the initials I. OR. Hz. The o has an Umlaut, and it may well be from the former Austro Hungarian Empire. I wonder which country it is from, and whether it has any value. Size is 17 mm diameter, the same as a Swiss half batz. Thanks. 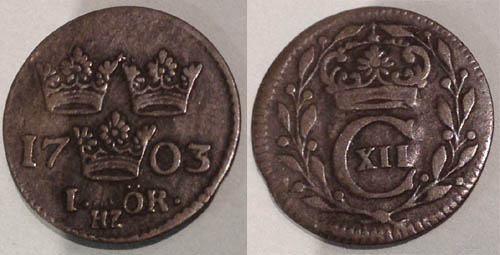 The Swedish monetary system consisted of the following:

The obverse of the coin shows 3 crowns splitting the date 17 03 on each side, the denomination 1 Ă–R and the initials HZ (Henrik Zedritz, Stockholm Mint administrator 1700-06) below. The reverse displays a wreath circling a crown with C XII (Carl the Twelfth) beneath.

King Carl (Latinized to Carollus or Charles) was 15 years old when he assumed the Swedish throne. Just three years later Sweden was invaded by a group of its European neighbors, an attack encouraged by Peter the Great of Russia. This began the 21 year long Great Northern War which Sweden ultimately lost. From the beginning, Carl personally led his troops. He never again returned to Stockholm, his capital city.