You have a three-cent piece, not a dime

Jack H. writes: I have a dime dated 1866, appears to be silver, seems to fit description of flowing hair half dime. But according to everything I have found flowing hair dimes were earlier up to 1795. This one has the head of the liberty with crown and flowing hair, script around outside edge “says united states of america” at the bottom of liberty’s neck is the date 1866 on the reverse is what looks like “III” with a wreath around the outside edge. Can you give me any idea if this dime has any value?

Brenda writes: I need information on a 1783 large coin penny from the United States. It has a bust on front with a wreath around head, and washington and independence. on the back it says unity states of america around the edges, a wreath in middle with a bow at bottom, one cent and under it there is a 1/100. Thank you so much for your time. Brenda

‘Not a U.S. coin (there were no U.S. coins until 1793 and none with a figure of Washington until 1932). You have a medal from the “Washington & Independence Series” struck in about 1820 by James Kean of Philadelphia. The piece is copper and is 28.2 mm in size and weighs 120 grains.

The obverse shows a laureate and mantled bust of Washington facing left. The legend, “Washington and Independence”, is around. The reverse imitates the reverse of a U.S. cent with ONE CENT within an olive wreath with a bow at the bottom. Around, UNITY STATES OF AMERICA (the wording was used to avoid the charge of counterfeiting). 1/100 below, plain edge. Value depends on condition. Approximate range: $60 – $500. Note that modern copies exist. These are worthless.

Was the Indian Head cent modeled on a marble bust?

Bob S. writes: I have a marble carved bust of a likeness extremely similar to the Indian head penny. On the back of a frame is the the note: “This is the original marble design for the Indian Head Copper Pennies – It was changed somewhat in the final design. Helen F Crossman”.

It is about 1 inch thick at the most and is 9 inches tall by 6 inches wide. It’s signed in pencil on the underside of the neck by “C. N. Pike – 1859”. I’ve done a bunch of reading on the Indian head cent and find a lot of references to Longacre and the transition from the Flying Eagle to the Indian cent… but no mentions of how the coin was designed. Bottom line, could this be authentic or just a nice wallhanger? Thanks a lot. Bob S.

Chief Engraver James B. Longacre was the originator of the Indian cent design. Note that there are no patterns that exist that show “AMERICA” as the country name. It is always “United States of America”. There is a good description of the origins of the Indian cent on the CoinSite. See 1859-1864 Indian Head Cent.

From the section about Longacre:

“An oft-repeated story has it that Longacre modeled the “Indian” after his young daughter, Sarah. Evidence suggests that this is pure fantasy: Researchers have found drawings of virtually the same female head in Longacre sketchbooks from 10 years earlier, always with the same adult proportions and the same long “Greek” nose. And the artist himself referred to this profile in letters and official memoranda as being that of the Venus Accroupie, or “Crouching Venus” a Greco-Roman statue displayed at that time in a Philadelphia museum.”

I think that Venus Accroupie might now be located at the National Museum in Washington.

Scott L. writes: I live in East Texas and recently discovered what I believed to be a token, however after a light cleaning I have discovered a ribbed edge similar to that of a dime which leads me to believe it is a coin of some type. It is smaller than a dime in size approx. 15mm, but similar in thickness. First impression is that it is copper, as it has the appearance of many of the wheats that I have unearthed, yet it has a few small nicks that show much more luster than any of the coppers I’ve found. It is also noticably heavier than any penny I have compared it with. The reverse has the raised letters “PAT JULY 23, 1872 *” as well as a raised circle in the center. The obverse has a ribbed five pointed star which covers the face of the coin. “ST” and “AR” are to the left and right respectively of the top point. “H. B& H” wrap the two bottom points of the star.

Both the reverse and obverse have a raised rim with the reverse being smooth and the obverse beaded. The star leads me to believe it is a Texas coin but I have been unable find any information. The Red Book has no information on it. Do you have any ideas on what this object is?

From the Civil War period to well into the twentieth century, trade and merchant tokens were commonly used as small change, mostly as cents. In the Civil War period the privately issued tokens served a real need, since coins of all types were hoarded for their metal content. After the Civil War, the habit was already well established and merchants realized that giving out a token instead of a cent, was a sure way to get customers to return to their establishment.

Dozens of engravers and token-makers sent salesmen on the road to sell tokens to merchants. I’ll speculate that the token you have is a sample design, part of a sample kit of designs, offered to perspective merchants. The use of “Pat (Patent) date” also indicates a sample other than a finished merchant token. Also, gun manufacturers commonly stamped Pat “(Date)” into standard U.S. coins, probably to test the punches that were used to mark firearms, knives, axes and other tools. Your “PAT” is raised not incuse in your token indicating that the Patent date was part of the original die. Approximate collector value: $10 -$35. 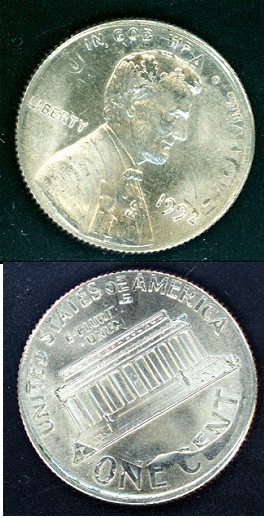 Kelly writes: I am unable to find information on my penny/dime. It is the same size, weight and edge as a dime but has the imprint of a penny. Year-1992. See image attached.

I believe this to be a genuine Mint error. This is a finished dime that accidentally got into a hopper with cent blanks. The dime was struck with Lincoln cent dies, almost obliterating the dime’s design. You can see some of the dime under the cent. Note the reeding on the edge. Reeding is impressed by the collar that holds the coin when it is struck. Dimes have a reeded edge, cents have a plain edge.

This type of error is valuable and should be stored in a Mylar flip and not handled. Do not clean the coin or wipe it, that will reduce its value. Estimate (this is a guess): $500+.

Christopher M. writes: I have a 1996 $100 bill. The serial numbers were printed off-center and I am trying to get an idea of how much it is worth. I know it is not counterfeit because I was the vault teller at a bank and it came in a brand new shipment. I had pulled it aside in my drawer and when I got paid, I cashed it out. The Dept.’s seal is just over the 1 of the large 100 on the right side of the front of the bill. Any help would be appreciated.

1996 series $100 notes are printed three times, the back, the front and then the serial numbers. The Treasury seal is no longer part of the third printing as in previous series. It is now printed with the face printing. There is a premium of about 10% for Overprints shifted to the left of the note. Major shifts where the Universal Treasury seal is BELOW the “100” at right are worth far more.

Tom F. writes: I have a “squished” Lincoln penny (can barely make out 1928) with the imprint “Belgian Village Chicago Worlds Fair 1933” I enjoy owning it but always wonder if there’s someone it’s worth more to? Any ideas?

You coin is a “elongated cent”. Elongated cents are a popular collectable and examples can be found as much as 100 years old. The cent is shaped in a special machine and then stamped with a message or symbol. These were popular at the various national pavilions of the 1933 Chicago Worlds Fair.

Elongated cents are often found at amusement parks, county fairs and are commonly seen at major coin shows where they are created to commemorate the show. Collectors of “exonumia” enjoy these. They bring from $1 – $25 depending on the type and the historical background.

Mark A. writes: I believe I have a 1965 Half dollar that was struck with silver, not clad. I’ve had it for about 20 years now. When I called stores to ask about it when I was a kid I was shrugged off. I recently did some research wondering if it could have been a silver proof that was made that way and removed from a holder. No silver proofs were made in 65 though. Have you ever heard of silver 65 halves before? Should I send this coin in for certification?

If your 1965 Kennedy half dollar weighs 12.5 grams, we strongly recommended you send it for authentication and certification. See Grading Services on the CoinSite Links page.