Duane S. writes: I received in change from a parking garage a US quarter. Upon close inspection it had been precision milled to contain an inner-secret-chamber, perhaps to conceal something. I only discovered this when the vending machine would not accept it. I looked at it and found it was constructed of 2 pieces. The quarter was milled down in the center, and a replacement section was created to fit into the milled out center. It fit together so well you could not tell it had been altered from 2 quarters to make 1. The fit was so perfect, only a hair line groove was noticeable.

I live near the Washington DC area and it seemed conceivable to me that someone could use this type of coin in “less than noble” activities. (Hiding microfilm, who knows). Yes, a spy quarter seems strange, but feasible. What is the first thing you do when you get arrested or pass through an airport x-ray, you empty your pockets of coins and you are given them back at the end. Any comments? Is something like this “Collectable”? 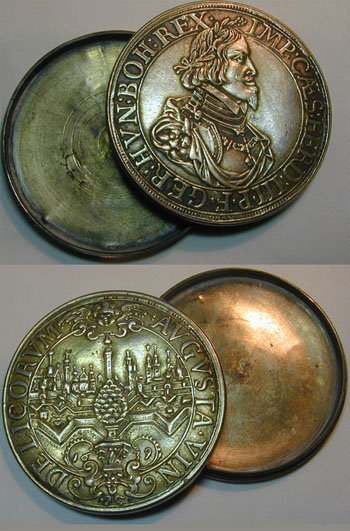 See the FAQ and read the article on “Magic Coins” for a bit more information about two coins made into one.

You weren’t clear if you had discovered whether the coin opened. That kind of coin is called a “box” and there are many who enjoy collecting them. Box coins have been around as an art form for hundreds of years. See the screw-turn box coin made from a 1639 Augsburg State (Germany) Thaler pictured on this page.

Many collectors like to fantasize about smuggling microfilm, or in the case of the 19th century Trade Dollars, opium. – hence the name “Opium” boxes. This is a bit misleading as this coin box was probably not used to carry opium. Yes, they may very well have been used to hold some personal, secret or illegal contents. But more commonly, many of these “box” Trade dollars were actually used as “keepsakes,” with a picture of a loved one inside. In any event, the art form stands on its own.

Trade Dollars circulated in China as a trade unit. Opium was prevalent there and China was also the place where many of the boxes were made as novelties. The relationship to China, Opium and the Trade Dollar gained this creation the American tag “Opium Dollar”.