Is this medal of King George III or George Washington?

Will E. B. writes: I would like to know something about this medal. (I’ve attached an image). 24k gold edge and image unknown inside. Back is leather. Signed Pierre Simon Duvivier. Is this medal of King George III or George Washington? The Boston public library gave me your address. Thanks, Will E. B. 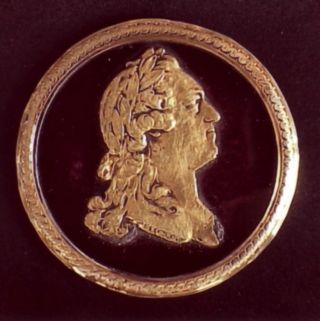 Probably not George Washington but possibly King George III of England. There are English minted tokens with portraits of Washington wearing a laureate, a symbol of royalty, but either they are really George III, in such as the Georgius Triumpho Token of 1783, a token that was intended to commemorate the ending of the Revolutionary War. There are some other English pieces that clearly show Washington in Military garb wearing a laureate but these are certainly the exception. Note that all Washington tokens have legends.

Simon Duvivier was commissioned at the Paris Mint by the Continental Congress to produce a series of medals to commemorate American Independence. The piece featuring George Washington is known as the “Washington Before Boston” medal. This is the classic portrait of Washington that is most familiar to Americans (there is no laureate). These popular medals were restruck by the Paris Mint from 1798 – 1974. The era of manufacture can be identified by the Paris Mint Director or Chief Engraver privy mark on the edge of the medal.

I do not know if Duvivier was ever commissioned to do a portrait of George III. If he was it was, probably not for an official medal (there are no George III official medals that match your image). Could this be a funeral medal? Possibly one of our readers can help.