D. McIntyre writes: I’m attaching a scan of an 1840 – 1000 dollar bill. Can you please look it over and tell me the authenticity of this bill and what it might be worth. Thank you.

This 1000 dollar bill is the infamous serial number 8894 reproduction printed on fake parchment. The Bank of The United States was a private bank and the United States of America was their biggest customer. Corruption and fraud were rampant and after quite a battle between President Andrew Jackson, Congress and the bank’s supporters the bank was finally put out of its misery in the 1840’s.

From the late 19th Century to the 1950’s, reproductions of Bank of the United States currency were distributed, often with an advertising message printed on the back. Since the notes are not official U.S. issues, it isn’t considered counterfeiting to reproduce them. Genuine examples of these notes are valuable.

The 1000 dollar bill with the infamous “8894” serial number comes from a firm that copied the original with the above serial number to use for advertising purposes.These notes were reproduced before Congress passed the “Hobby Protection Act” requiring the words “copy” or “Replica” on reproductions of coins or paper money. The “8894” copies today are commonly found in packages of play money along with other reproductions of private issue currency. 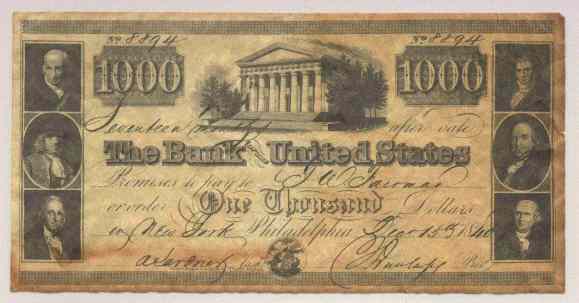