Time M. writes: Hi, Can you help identify the coin in the picture please. I have not had any luck to date. I think it is called gun money because it was made with old cannon balls. The date on the coin is 1689. My son found it under our house. Can you help me out? 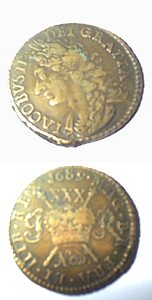 This is an example of the civil war coinage of James II of England. After James left England he went to Ireland and raised an army to attempt to regain the throne of England. Lack of money required ingenuity and he convinced his supporters to mint base metal coins that would be exchanged for silver after the successful completion of the war.

The metal for the coins came from donations of base metal items such as cannons, church bells, pots and pans, and old guns. These base metals coins took on the moniker of “Gun Money” because of their origin. They were produced in 1689 and 1690.

An interesting feature of these coins is that they were struck with the month of issue as well as the date. Also, in this era, England was on the Julian Calendar and new year’s day was March 25 so coins dated March 1689 and March 1690 were both struck in the same month.
Counterfeiting was rampant and “gun money” became increasingly unpopular. When William III captured the Dublin Mint and defeated James at the Battle of the Boyne, the coins were demonetized.

Not many of gun money coins survived but they are popularly collected and have a strong historical association. Its difficult to grade your coin from the image since it is poorly focused but average circulated pieces bring approximately US $30-$60 for this type.