Shiva writes: I am attaching the image of the coin that I possess. Kindly let me know the value of the coin and let me know if there are any customer willing to buy it. I tried from your site where I am not able to locate it. 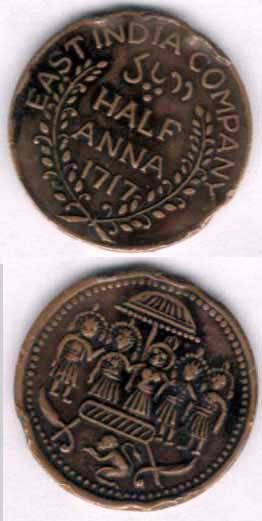 The East India Trading Company began with a license to trade in Bengal India in 1633. The coinage used by the East India Company was Mughal type coinage, without images as proscribed by the Muslim faith and in Arabic. The designs were approved by the Nawab or governor.

The first East India Company half annas and annas under the Bengal Presidency weren’t produced until AH1188 (Moslem Calendar), the year 1774 in the Gregorian Calendar and were issued under the name of Shah Alam II, a Moghal Emperor and struck at the Calcutta Mint. The coin is in Arabic.

It wasn’t until the power of the East India Company became so great as to be more of a conqueror of India than its trading partner did English and British symbols begin to appear on East India Company coinage. By the closing years of the 18th century Indian coins in English appear in the Madras Presidency in the form of the 1/96th Rupee (also known as a 1/2 dub).

Where does your token fit into all of this? You have a fantasy piece most probably a souvenir of the East India Company probably made, based on the style, I would guess, somewhere in first or second quarter of the 19th century. Besides the style and language being incorrect, the Hindu symbols on the reverse are inappropriate for this area and era.

There are collectors for this fantasy (tokens are under the heading of “exonumia”). Approximate value range $5 -$15.