David H. writes: Here is my question: I have two Liberty US silver dollars, one is dated 1803, and one is dated 1804. Both are in possibly fine condition. Can you give me some idea of value?

Sorry to be the bearer of bad news, but it is extremely unlikely that your coins are genuine. Known as the “King of American Coins, the extreme rarity of authentic 1804 dollars makes it very tempting to counterfeiters. For well over a decade, an ever-increasing number of bogus U.S. coins have appeared in the marketplace – most of them originating in Asia and brought home by American servicemen returning from the Middle East. (See: Counterfeit Seated Liberty Dollar) 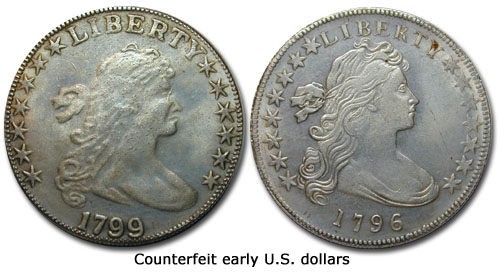 Heraldic Eagle Dollars dated 1804 are extremely rare (the last date of dollars in this period was 1803). Only 14 pieces are known (and accounted for) and volumes have been written about them. The first piece was actually struck in 1834, when dollars were not part of the coinage system, for use in a presentation set of coins given to the King of Siam. Pieces were also made for the Mint Cabinet and, years later, at the Philadelphia Mint for specific collectors. One specimen brought $3.8 millon at auction in August of 2013.

Counterfeits of this date are plentiful. Many were created in the Far East and sold to U.S. soldiers during the Vietnam War.

Authentication is mandatory. You can find certification and attribution services under Coin Grading Services on the CoinSite Links Page for more information.

You can see values for Heraldic Eagle Dollars (the 1803) on the “What’s It Worth?” feature on CoinSite.