Ramon L. writes: While studying in Israel, I purchased a 1842 Seated liberty silver dollar at a small antique dealer store . The mint mark “cc” appears on the reverse, under the eagle. I have searched to verify the authenticity of the coin, but I am informed no coins were issued with this mint mark in 1842. Could this be an “error” coin? Thank you for the the anticipated assistance.

Unfortunately, your coin is a counterfeit. It is one of the many phony U.S. coins that have appeared in the coin market over the last several decades – the majority reportedly coming from Asia. Like yours, we’ve seen many with impossible date/mintmark combinations.

The Carson City Mint wasn’t constructed until 1866 and no dollar coins were struck there before 1870, which would eliminate the possibility of your coin being minted there in 1842. In addition, the motto “In God We Trust” was not added to U.S. dollars until 1866. To the experienced eye, the coin just has the wrong “look.” Note the poor quality of strike and details on the counterfeit piece. Closer examination reveals that the counterfeit coin is both underweight and the surface appearance seems closer to that of an aluminum/silver alloy? rather than an authentic 90% silver coin. 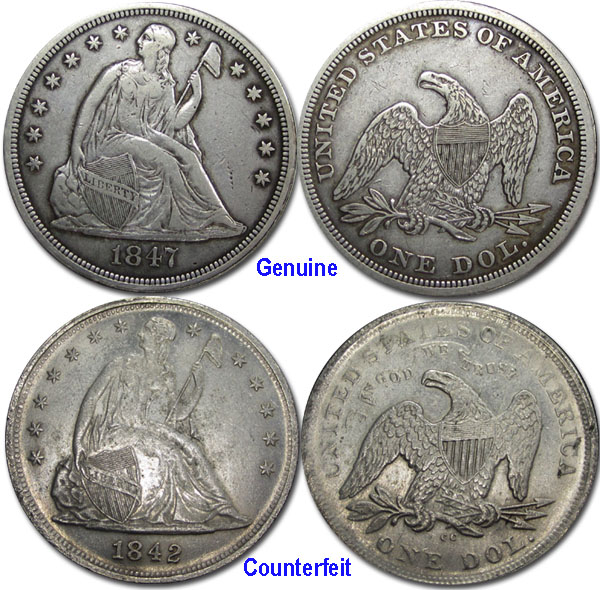 Counterfeit U.S. coins from Asia have been around for years, and many were brought home from Vietnam by returning servicemen. More recently, particularly since the U.S. involvement in Afghanistan and Iraq, they have been appearing with more frequency in the Middle East. One source told us they were being offered to U.S. airmen outside the gate at the U.S. air base at Kandahar.