Barrie writes: Picture attached/Thanks. (This is in response to a letter requesting information about the pictured Chester Arthur medal)

This is one of the “premium” tokens, part of a complete set of privately minted presidential medals that were prevalent in the 1950-1960 era. These were promoted by various companies (it made them look patriotic in the communist-witch-hunting 50’s ). There are variations in brass, nickel and copper. There is little or no collector value in your piece, especially in the damaged condition shown in the picture. 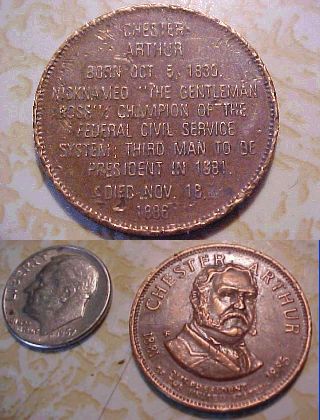 Collectors of this type of material want complete sets in new condition. For example, a complete set of the Shell Oil presidents medals in the original cardboard holder brings about $75 in exonumia auctions. If you like medals, write to the Philadelphia Mint and request their medals catalog. They sell reproductions of most 19th and 20th century official medals at nominal prices. They are quite well done and struck in heavy yellow brass. The subjects include Indian Peace medals, life-saving medals and presidential inaugural medals. .

Dec 21, 2013coindoc
When was the last year the Susan B. Anthony dollar was made?"Gold" state quarters?