Are 1929 $5 bills printed on different paper than other bills?

Tony V. writes: Doc. My question is, I have an old five dollar bill, the series is 1929. The bill has four big black (B) on the front, and on the left the inside of the bill it says, the Federal Reserve Bank of New York. The five dollar bill seems to be made differently than all the others. It’s seems to have been made on a cloth material instead of paper. The printing is very dark, it does not look or feel like any of the other bills. I just cannot get over how the bill feels like it was made out of a cloth material. Is it? Do I have anything important? Thank you for your time. Sincerely, Tony.

U.S. paper money is printed on a blend of cotton and Linen not paper. There are certainly differences between National Bank notes of 1929 (Brown seal) and the currency we use today but the stock is pretty much the same.

Notes for circulation are not printed individually but on sheets of 36 subjects (though 18 subject sheets were tried once). There are three printings (back, front and Treasury seal and numbers). The dry, completed sheets are stacked on other sheets. The scheme allows cutting vertically so the numbering is consecutive in vertical stacks of 1000 notes.

There are instances of notes printed on improperly made stock. These notes can be very thin or double thickness. These notes are considered errors and bring premiums of varying amount depending on the grade (condition stated as term of the universal paper money grading standards) of the note.

Interestingly, standard stock U.S. paper money after 1928 weighs exactly 1 gram. If the note was made out of some other material, or was double thick, it would weigh more or less than the above. So there is your test. 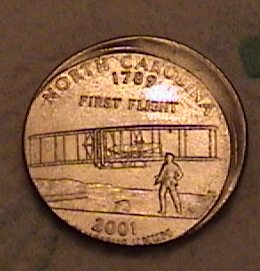 Charlie S. writes: I recently emailed you about a North Carolina statehood quarter to find an estimate of its value. You suggested I send a scanned copy to you, so here it is.

It looks like a off center quarter, struck out of the collar and not centered correctly. This happens when the planchet (blank) doesn’t get seated correctly in the retaining collar. Last time I looked these brought between $100 and $150.

Will the U.S. Mint ever produce a silver coin again?

Bradley B. asks: Will the us mint ever produce a silver or silver content coin again? I metal detect and the clads that have been produced come out of the ground completely useless. I just don’t see coin collecting as an option for future generations with the valueless coins being produced today.

The U.S. Mint does currently produce collector versions of proof sets and commemorative coins in both silver and gold but circulating issues will remain in base metal since coins are essentially tokens.

The collector value of coins is not dependent on the whether the coin is minted in precious metal but the rarity, condition and collector interest. Some of the most desirable coins in the United States are the colonial issues. Some of these coins are extremely valuable though most were struck in copper.

Some modern clad coins in gem condition will become valuable because few were saved and collectors will need them to complete their sets.

Sylvia S. writes: I have an 1854 half dollar coin and I am trying to find information about it and its value. On the front is a person sitting on a rock with stars surrounding it. It also has arrows on either side of 1854. On the back is an eagle with arrows in his feet. I recently came across this coin. What can you tell me about it? Thank You!

Your coin is a United States Seated Liberty half dollar with Arrows at date. This particular design was minted for only 2 years, 1854 and 1855. You can see extensive historical information about all Seated Liberty half dollars at the CoinSite’s History of U.S. Coins. The value of your coin depends very much on grade (condition). 1854 Seated Half dollars bring from $15 – $600+ depending on actual grade.

For a discussion on grading characteristics see the FAQ and the article on U.S. Coin Grading. 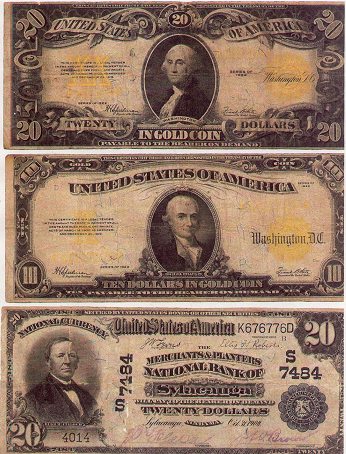 Jeff and Taffy K. ask: What can you tell us about these notes?

Your first two notes are 1922 series United States $10 and $20 gold certificates. These notes are still legal tender for their face value but haven’t been payable in gold coin since 1933. Their physical size is much larger than the notes made after 1928 are often called “horse blanket” notes by collectors. The notes are low grade and look to be in about VG-Fine condition. Approximate Value: $20 – $100, $10 – $75

The third note was part of the National Banking System that was began after the Civil War to standardize and gain acceptance for paper money. The note is a $20, 1902 series, Third Charter period, issued on the Merchants & Planters National Bank of Slacauga, Alabama, Charter #7484. Approximate value: $150 in VG-Fine grade.

For more references about paper money, search the CoinSite for paper money.

Danny writes: Dear Coin Doc, I have a coin from 1837 approximately the size of a half dollar. It appears to be made of copper. On the front there is a girl and it reads E. pluribus unum on top and the date (1837) on the bottom. The back reads Bentonian Currency, Mint Drop, and the date once again. If you’re familiar with the coin could you please tell me a little bit about it?

The era of the late 1830’s into the 1840’s was a period of economic depression in the U.S. The battle was between proponents of the Bank of the United States, a private institution and President Andrew Jackson who wanted to abolish it. Many privately issued tokens were struck to take the place of hoarded Federal money. These “hard times” tokens also became political propaganda instruments.

The “Mint Drops” were hard money advocates and “Bentonian Currency” refers to Senator Thomas Hart Benton, a supporter of President Jackson’s hard money policies. This substitute for a U.S. large cent was a statement of hard money versus unbacked, inflating paper money (sarcastically called “shinplasters” as they were “only good for stuffing in your socks to keep warm in the winter” that were issued by the private, Bank of the United States).

“Hard Times” Tokens are popularly collected as they have interesting designs and tell the story of the economic struggles of this era. As with coins, condition and variety play and important role in value.

Joe N. asks: What would the value of a set of three 20 dollar bills be if they were consecutive sereal numbers in mint uncirculated condition(1985)/ The middle bill has no printing on the back side. The other bills are complete as the printing goes.

You have a note that came from a sheet missing the first printing. Having consecutive notes are a plus. Condition is everything in coins and currency so that any bends or folds made in the paper reduce its market value.

A group of three 1985 consecutive FRN notes, the middle one missing the first print and in CU (uncirculated condition) would bring approximately $300.

I have a set of Rhode Island State quarter ‘errors’ – What does it all mean?

George writes: I recently aquired a set of Rhode Island ‘errors’. They were cheap and easy to obtain but came with this explanation of their errors. What does all of this mean?:

Some of your description has to do with die varieties or minor “struck thrus”. A fairly good number of working dies are necessary to produce the half billion or so examples of each State Quarter design. I’m sure someone has cataloged observed varieties (these are the i.e “iii-g-6” designations). Minor varieties are not necessarily valuable but are of interest to those that collect coins by die varieties.

There are often foreign bits of metal or cloth that can fall onto the surface of a blank before it is struck. The area of the blank that is covered either doesn’t receive a complete impression or the foreign material is imbedded into the finished coin (for example,embedded staples are often seen in this type of error). Market demand rises with the most interesting or spectacular “struck through”.

Other minor varieties in your list have to do with die scratches, which can be an from an actual gouge in the surface of the die which creates a raised line on the coin or from light die scratches caused by deep polishing a die in its middle to late life. Late die state coins are not esthetically attractive to collectors unless something spectacular happens to the die. The 1922 plain cent and the 1937-D 3 legged Buffalo are examples of victims of severe die polishing that have captured the collector’s imagination.

Die Breaks are the result of actual cracks in the die. The die can crack from age or excessive striking pressure. Cracks appear as a jagged raised “blobby” line on a finished coin. If a broken piece falls out the die, resulting coins will have a raised mound of metal where the broken die is missing. This is known as a “Cud”.

Doubling is only of interest if it is the result of a improperly made die. Doubled dies are less likely with the Mint’s new technology. Most coins that show evidence of doubling are not from a doubled die but from the result of the coin moving when it is struck. This is the fault of a loose collar that holds the coin in place. This kind of doubling creates a shelf like effect on the doubled letters or devices not the distinct separated doubling that you would see from a doubled die. “Shelf doubled” coins are essentially unique in that no two coins “chatter” the same. When a loose collar is discovered by a Mint employee, a screwdriver repairs the problem.

You can get more basic information about errors and approximate market prices from the CoinSite “What’s It Worth?” feature.