What was the silver value of 1964 and 1965 half dollars when they were minted?

Mahra P. writes: I am curious about the 1964 and 1965 silver half dollars. What was the price of silver in each coin at the time each coin was minted? What is the collector value for these two coins today?

The government realized that the price of silver would eventually rise above the face value of U.S. silver coins and struck dimes and quarters in a copper-nickel composition from 1965. The mint continued to strike half dollars in a clad composition containing 40% silver but by 1970 the value of silver was in danger of exceeding even the debased half dollar. The 1970 half dollar was never issued for commerce since Congressional debate over continuing the 40% silver half prevented the mint from striking half dollars. Only mint and proof sets contain the 1970 half.

Half dollars dated 1971 to the present are struck on the same copper-nickel clad material as the dimes and quarters.

Average circulated 1964 half dollars are currently worth about $7.00 (summer 2013) and 40% half dollars bring about $2.00 each. Gem uncirculated examples bring even more.

Is this a genuine 1942/1 overdate Mercury dime? 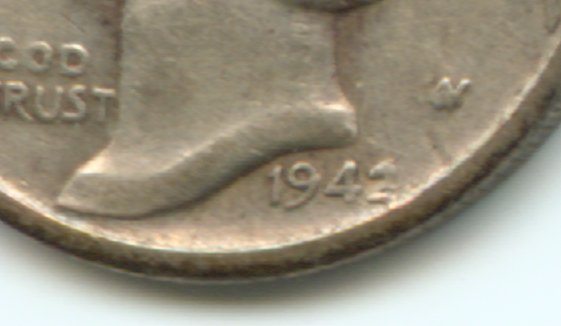 Brian C. writes: There is a set of 1916-1945 Mercury Dimes available on ebay. The person who put this collection online (me) didn’t know enough about coin collecting to check out the individual coins. The set includes a 1942/1 overdate Mercury Dime, making the set more valuable. The bid is currently fairly low for the set, especially with the overdate.
Because there are already bids on the set, I can’t change the description at this point. Here is a picture of the 1942/1 overdate (included in the set):

A dime struck on a quarter?

Your “double headed” dollar note is most likely an “offset error”. Please see Whatâ€™s My Paper Money Error Worth? for an explanation, prices and images of offsets and other paper money errors. There is also a simulated “error” with no part of the reverse design visible. This is created by pasting two one dollar notes together back to back.

1. Yes, this is done by treating the note with bleach. Sorry, no cigar. 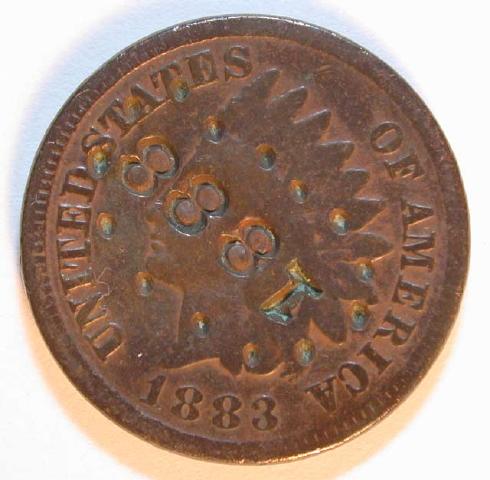 Sasha O. writes: Hi there, I found this indian head penny in a roll my mother gave me. This one is unusual because of the 1888 stamp on it. Can you tell me what is it’s significance and/or value?

This was stamped with the number “1888” by someone outside the Mint, that is, it is not a mint error. Stamped coins were often used for advertising purposes or as, for example, a hat or coat check token. There might have been many tokenized coins with different numbers to signify a specific place in a coat room where a hat or coat was stored. The recipient would return the token and redeem his/her clothing when one left the establishment.

Of course, this is just speculation. This kind of alteration goes under the heading of “Exonumia” and if one could identify its exact use, it would sell for $15 or so.

Jeff N. I have a 1996 Twenty Dollar bill with an oddity. On the face of the bill, the serial number on the right is green, while the serial number and treasury seal on the left are blue. The bill face is also white compared to the typical green/black tint on all bills I have compared it to. Is this a common oddity or do I have a bill I could sell to a collector?

It sounds like someone laundered their clothes and left their money in the pocket.

I like to wash my money in Cheer with a tad of bleach. It brings out those colors just right!

Sue P. writes: I have what I think is a token from the state of Missouri. It has the imprint of the state of Missouri in the middle, with a number 1 inside the state. The words: “Missouri Sales Tax Receipt” surrounds the coin. Do you know when this token was issued, and what people did with them? I can’t imagine the entire state of Missouri turning these in to Uncle Sam at tax time, as proof of tax! Thanks so much for your time.

Because cents were valuable in the Depression years of the 1930’s, some States issued sales tax tokens either in fractions of a cent or mills (1 mil=1000th of a cent). Since Sales tax would be exact and there were no fractional cents to give change, the final price of an item was rounded up and the difference paid back to the customer in sales tax tokens. These tokens could be used to pay all or part of any sales tax at the time of another purchase.

Do all genuine 1932-D quarters have a “filled mint mark”?

Genuine 1932-D Washington Quarters have distinct serifs with die polishing under the mint mark. The inside of the “D” is often filled but the outside serifs are usually visible giving the mint mark a rather square, blob like appearance. Since the mint mark sits in a depression on this coin, the “D” is easily discernable even in low grades.

I suggest having any 32-D quarter authenticated by a third party grading service, especially if you have no training in counterfeit detection. See the CoinSite Links page for links to NGC, PCGS or ANACS for more information.