Ex. John W. Adams Collection, Bowers and Ruddy (fixed price), 1982, lot 54, where it was described: 1794 Cent. S-59. Tied for Finest Known. This coin, a superb Choice Uncirculated, MS-65 example, light glossy brown with considerable original mint red, is from the famous Lord St. Oswald Collection. For nearly 170 years the coin resided in the St. Oswald family until it was sold in a London auction at Christie’s in 1964. Offered at the same time were other United States coins dated 1794 and 1795, including two Mint State 1794 dollars, which presumably were obtained during a visit to America by an ancestor in 1795. The cataloguer of the coins, Baldwin’s, related to the present writer that the pieces were brought loose in a pasteboard box to Christie’s, along with carefully-attributed ancient pieces. It was believed that the United States coins had little value! Fortunately, the pieces had been carefully preserved from handling or other deleterious effects over the years, with the result that the auction appearance presented to the numismatic fraternity dazzling Uncirculated examples of 1794 and 1795 copper and silver coins which had been previously unknown. Bidders from both sides of the Atlantic intensely competed, with the result that numerous price records were set. Far from being unimportant, the United States coins were the financial highlight of the event!” 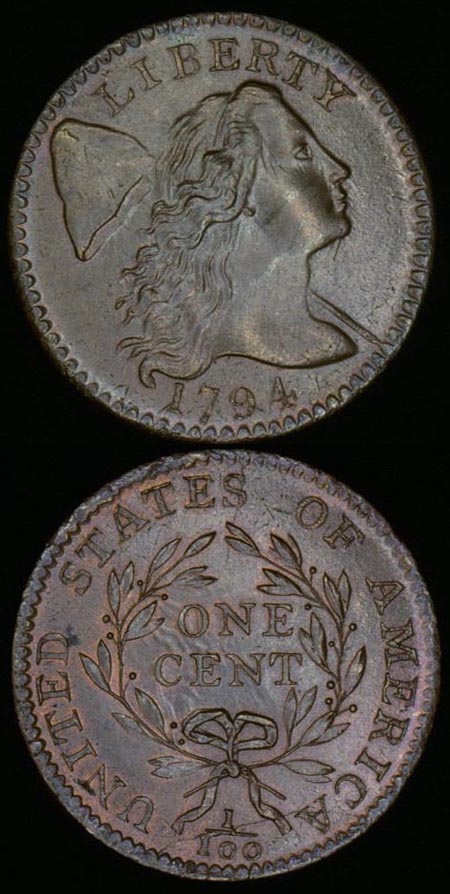