Why are toned coins so much more expensive?

David B. writes: I recently bought some certified uncirculated Morgan Silver Dollars. I bought them because some had beautiful rainbow colored toning. Yes I bought the best ones. Later I realized that they were more expensive then the same one’s that were not toned & the same grades (MS64 & MS65). Why are they much more above the price of the regular coins? I heard that dealers cleaned toned coins.

Toning, or to use another term, patina, is natural on metals such as silver and copper. The natural state of a coin a century or more old is that it has acquired a patina. This is the result of the coin’s metal combining with oxygen in the air. The depth of the oxidation and the type of chemicals that might have been in the air in the presence of the coins, determine what the patina will show. Silver coins kept in the same environment for a long period of time will most likely show similar patterns of patina.

A good example are coins that have been kept in cardboard albums for years. Albums like this contain sulfur. Sulfur combines easily with coinage metals like silver, copper or nickel and is capable of creating a multicolored patina on each coin. The old National Coin albums of the 30s-60s were wonderful incubators for incredible multi-hued, rainbow like, peripheral toning. Dealers and experienced collectors often refer to this as “Wayte Raymond” toning, so named for the well-known dealer who introduced these albums.

“Rainbow” toning is an optical effect caused by graduated layers of silver oxide on the surface of a coin. This is often seen on coins that have been in contact with a sulfur source for a good number of years (usually 20 years or more).

With few exceptions, silver coins left undisturbed for many years will acquire toning from the chemical elements in the air of the environment in which they are stored. Virtually all white 19th century silver coins you see today have been “dipped” at one time or another. This is not necessarily bad if done properly. However, dipping away original toning removes the “thin film interference” of toning between the coin’s surface and the impurities in the current environment, possibly resulting in eventual discoloration or other problem. 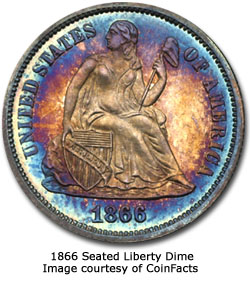 Removing patina with the mild acid that is in such products as Jewel Luster also removes the oxide layer and thus the top layer of metal. The luster of a coin, the effect that causes light shined on a coin to move in a circle, is caused by flow lines created when a coin is struck. When you dip a coin, you are also removing the flow lines and thus the luster as well. Sometimes no more than two dippings will turn an uncirculated coin into one that is AU.

Knowledgeable collectors have long appreciated the rarity and beauty of originally toned coins. Since at least the late 1950’s, and particularly after the mid 1970s, “Gem toned” coins have frequently (some would say consistently) brought many multiples of the prices realized for “white” coins in the same grade. One only has to look at the incredible prices (and the incredibly beautiful coins that brought those prices) realized in the November 2013 Heritage Auction Galleries sale of the Eric P. Newman collection. Both the coins and the prices are literally jaw dropping!