In 18th Century Australia, the money of choice in gold was the British guinea, the Portuguese moidore and the Indian mohur. The silver money of choice was the English shilling, the Dutch guilder and the Spanish dollar or 8 Reales. One of the first attempts at setting up a regular local coinage was made in New South Wales in 1813. A Spanish Dollar was taken and a circular piece was removed from the center and stamped with the state name and a crown; the value of 15 pence was stamped on the reverse. Similarly, the 8 Reales, now missing the center, was stamped “Five Shillings”. The holed dollars were known as “Ring Dollars” or “Holey Dollars” and the center piece was called a bit or dump. 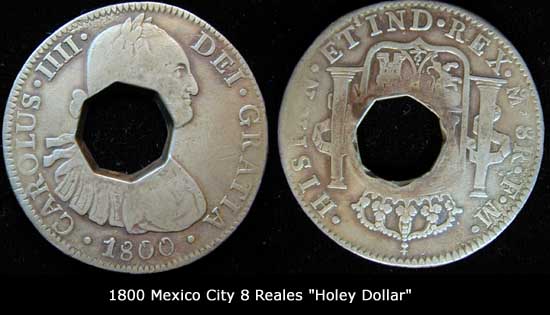