What is a Bar cent?

The period from 1652 to the American Revolution in 1776 saw many different and creative attempts to supply coinage for commerce in the Americas. Though English coins circulated when available, the Crown never made a effort to provide coinage for the colonies.

Of the first group of Colonial coins were the Massachusetts pieces. Among them, the silver Oak Tree coinage exists in 2 pence, 3 pence, 6 pence and shilling denominations, all dated 1652.

The first attempt at some sort of American Union was the Confederation. Each State attempted to create a State coinage. The copper pieces by William Moulton (WM) for New Hampshire were essentially a pattern coinage and never circulated. 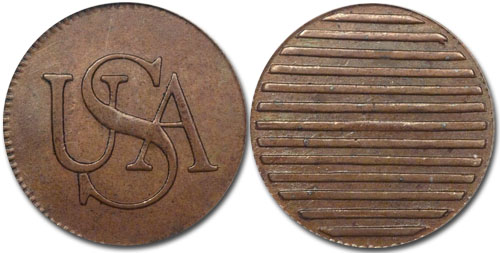 The New York copper “Bar” cent was probably privately made in England for use in New York. It shows 13 parallel and unconnected bars on one side (representing the 13 original colonies) and the monogram “USA” on the other. These coins are known to have circulated in New York during November of 1785. The simple but elegant design is exactly the same as that used on the uniforms of Continental Army soldiers.

There is also a struck copy made by J.A. Bolen in the early 1860’s. In the Bolen copy, the “A” passes under, instead of over, the “S” in USA. The copies are worth much less than the originals.

Bar cents have been reproduced by museums and others for educational purposes. Replicas made after the U.S. Congress passed the Hobby Protection Act of 1973, must show the word “copy” or “replica” somewhere on the coin though replicas made outside of the U.S. often do not show this. Replicas have no monetary value.