Ricahrd B. writes: Hello, Coin Doc. I have a Washington Peace medal which I purchased from a large estate which had a formidable collection of Native American and colonial artifacts. This medal is made from an oval disc of silver and is line engraved with an Indian with a peace pipe and George Washington extending his hand with a farm scene in the background on the obverse. The reverse has an heraldic U.S. eagle.

The entire oval is framed by a thin silver collar with a loop at the top. The engraving is quite sharp and shows many small details. It is not pierced. How can I determine its authenticity? My research has found statements to the effect that the ANA has never been able to agree on the authenticity of any of these silver George Washington peace medals. Is it even worth trying? Also, where can I find an image of the real thing (mine is dated 1793)? Thank you for your consideration. Richard

Gifts of Peace Medals to Indian leaders were a part of the national policy of the English, French and Spanish during their experience in North America. The medals were cherished by the recipients as valuable icons and often these medals were taken to their graves.

Peace Medals were adopted and institutionalized by the American Government soon after the Revolutionary War when the new governement was establishing policy concerning their relationship with the native Americans. The Washington pieces were hand engraved by well known and skilled silversmiths such as Joseph Richardson and were manufactured during the first American administration beginning in 1789. They were looped at the top and designed to be worn as a breastplate.

Subsequent medals were struck from dies at the United States Mint in Philadelphia. Every President from John Adams(1797) to Benjamin Harrison (1889 and 1890) had their own Indian Peace Medals. Reproductions of U.S. Mint struck examples are currently available from the Philadelphia Mint.

Because the Washington medals were hand engraved, they are difficult to authenticate. There was a Washington Peace Medal in the Garrett Sale (see the image below) and this is often used as a model. You might try the ANA again as they are currently sending controversial items to various experts around the country and even around the world as a method of acquiring a consensus of authenticity. 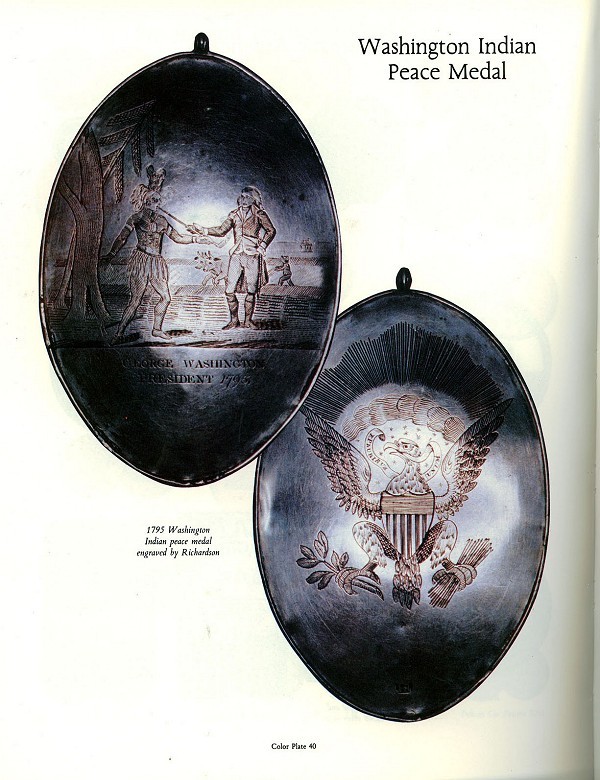