Was the Fugio cent the first coin authorized by Congress?

Constance writes: I’m trying to find out what the first US coinage authorized by congress was. I heard it was copper and said something about “times up – shut up”. Can you help? Thanks a ton.

Times up – shut up? Now there’s an interesting twist of the words that are on the coin. Sounds like the rumor that’s passed around a circle – it’s amazing how different it comes out when it reaches the other end! 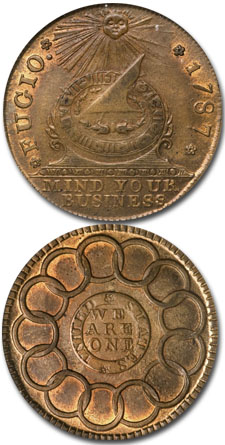 The first coins issued by the authority of the United States were the “Fugio” cents, called so because of the word “FUGIO” on the sun above the sun dial (This Latin legend represents the expression “Time Flies”). Underneath is the words “Mind Your Business”. Fugio Cents were another effort to supply small change for commerce in the fledgling United States.

Note that Fugio cents were coined by a private company in New Haven, Connecticut but other companies might have made them too. Abel Buell was the die sinker. There are many varieties; all are dated 1787. Purportedly, Benjamin Franklin was the author of the legends. The copper is said to have come from the copper bands from powder kegs sent by the French during the Revolution.

The first United States Mint issues weren’t struck until the Philadelphia Mint was built in 1792. The first coins struck were essentially experimental coins and include the 1792 Silver Center Cent, the 1792 Birch Cent and the 1792 half disme (pronounced like the word “steam” but with a “d”).

The first regular issue coins weren’t struck until 1793 and consisted only of the half cent and one cent.

Dec 16, 2013coindoc
A Roman sestertius?Why are the fractional coins of 1851-52 more common than the dollars?