Carl writes: What info can you supply about Victor D. Brenner engraver of the 1909 Lincoln head penny. Area of birth, employment, other facts. Thanks.

Born as Victoras Barnauskas in Shavli, Lithuania, Victor D. Brenner (1871-1924) was a turn of the 20th century sculptor who emigrated to New York City in 1890. In 1898 Brenner went to Paris, where he studied with the French medalist, Oscar Roty at the AcadĂ©mie Julian. He won awards at the Paris Exposition of 1900. After returning to the U.S., he embarked on an illustrious career as a medalist.

He had a near obsession with Abraham Lincoln of which he modeled medals and plaques. By chance, he was 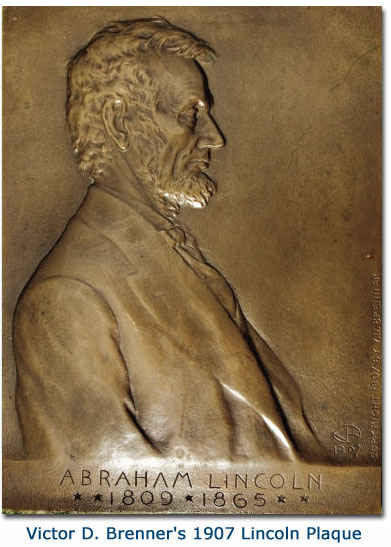 contracted to create the portrait of President Theodore Roosevelt for the Panama Canal service medal.

During the long sittings, the two men talked about all kinds of subjects and eventually became close friends. Roosevelt told Brenner about his desire to see a renaissance of artistic designs for United States coinage and his unhappiness with the current Chief Mint engraver’s lack of artistic spark (Charles E. Barber).

Roosevelt invited Brenner to submit designs for consideration for the new cent that was to commemorate the centenary of the birth of Abraham Lincoln in 1909. His first reverse design was rejected by the Mint Director (Leach) but the second, featuring two ears of durum wheat was accepted along with the portrait of Lincoln that had graced Brenner’s 1907 medal.

When the cent was released in 1909 a controversy arose, mostly instigated by the press, about Brenner’s initials on the lower edge of the cent’s reverse. Most artists sign their work and though other coin designers before Brenner had their mark or initials somewhere on their coins, many felt that the V.D.B. on the reverse was too prominent. The initials “V.D.B.” were removed from the coin completely in September of 1909. That created several varieties of this first year of issue. They were restored in 1918 in tiny, almost invisible letters to the lower edge on the truncation of Lincoln’s Bust. The initials are still there on current Lincoln cents.

Dec 15, 2013coindoc
c. 165 AD Roman coin found buried beneath ruins in GreeceWhy do some U.S. coins have no mint marks?