United States Ten Dollar Gold Coins, also known as Eagles, were minted in several styles from 1795-1933. They all share the same basic theme; a head of Liberty on the dated side and an eagle on the other.

Most people are familiar with the last two styles. These are the “Liberty Head,” made from 1838 through 1907, 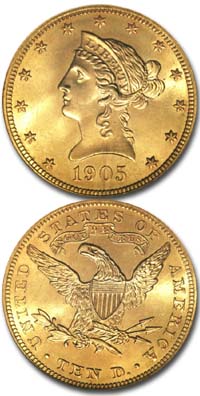 Liberty Head Eagles are quite easy to find. Most examples are worth about $680-$715 and closely follow the price of gold bullion. There is just under one-half of a Troy ounce of gold in each coin. Most of the scarce dates in the series are dated prior to 1880. The single rarest date is the 1875, followed by most of the “S” mint coins of the 1860’s. There are also one of a kind, virtually perfect condition pieces that show up at an auction from time to time and sell for tens of thousands of dollars. 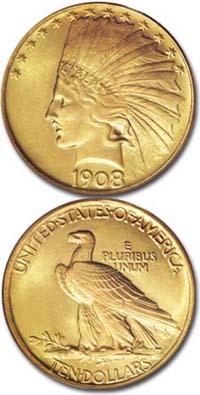