Piero writes: I found a coin that I want to identify. On one side is the face of a woman with a left profile. She is surrounded by three small dolphins: one is by the nape of her neck, the other two are in front of her face. She appears Greek. On the side of the coin is a chariot with 4 horses. There is an angel above who appears to be casting stars on the charioteer. Below the chariot are 5 symbols: the first appears to be a shield, and the last appears to be a helmet. There is writing on this side : YPAK and OEIRN? Can you help? 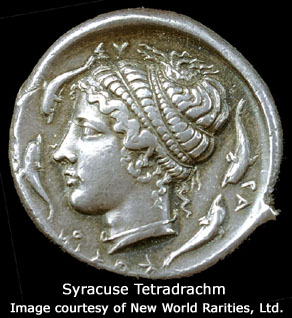 You have a Sicily (Syracuse) Tetradrachm, minted between 340-320 BC. The obverse shows a four horse chariot (quadriga) being driven by a charioteer who is crowned by Nike (winged goddess of victory) flying to right and above. The legend below in Greek Characters says Syracuse. The reverse shows a female head facing left with three dolphins around. Value range, depending on type, style and grade $500 -$1,500 + .