Bruce K. writes: I have a close friend who was left an 1862 $20 dollar British Columbia Gold coin pattern. It is in very good condition but is quite obvious that it is not gold. We took it to a collector that has 40 years experience and has not seen one like it before. He felt that the quality of the work was probably better than a counterfeiter could do. Could it possibly be a trial pattern and could it have any value? The last sale of the gold version sold at an auction in 1997 for $170,000.00 Wow! It is identical to the coin featured on the cover of the 1998 Charlton Standard Catalogue of Canadian coins except it does not have the designer’s name on it.

Sounds like a museum copy. In the United States, copies must be clearly labeled REPLICA or COPY but one stills sees older copies made before the law went into effect. Some copies can be very deceptive. Copies can be made as die struck or just be casts. Look at a slight raised line on the edge of the coin to identify casts. As far as I know the above pattern was never made in “gilt”, that is gold plated, over base metal.

One of the neatest story regarding museum copies was the Black Sea fiasco about ten years ago. It seems that a large group of silver coins were “discovered” and attributed to an ancient people that lived in the Black sea area more than 2,200 years ago. These were bought up by many dealers and sold to the public. A controversy arose when some dealers discovered uncharacteristic diagnostics on the coins. Public and private meetings were held where each side in the conflict presented experts in metallurgy and other disciplines to support their case. When it became possible to travel to Bulgaria in the early 1990’s, many scholars and dealers traveled there to visit the famous museum and its treasures. And there, in the museum shop was, you guessed it, was lots of those controversial coins – all museum copies! 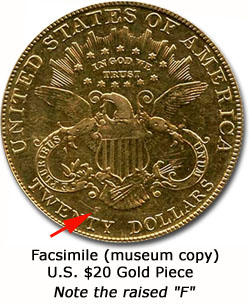 In another encounter closer to home, I recently purchased a 1904 U.S. $20 gold Liberty. The coin had the proper weight but looked “off”. Upon close inspection, I discovered a small letter “F” (for FACSIMILE) in the field of the coin at about 7 o’clock on the reverse. (See image at right). Except for a somewhat unusual softness of strike in the centers (one of the reasons the coin didn’t look “right”), the copy was very well made – but quite obviously another museum copy. Interestingly enough, the piece assayed at .967 oz. AGW (actual gold weight) – about as close as you could get to the gold content of an authentic U.S. twenty – .9675 oz. AGW.

Dec 8, 2013coindoc
Cuban Peso with Jose Marti on the faceHow do you start a good coin collection?