The term re-engraved is really a misnomer. Coins are struck from dies, not engraved. The term really refers to something that is done to a coin after it has left the Mint.

The most notorious of the re-engraved coins is a Lincoln cent with a tiny head of John F. Kennedy facing Lincoln. This particular alteration accompanied a card comparing the life of Lincoln and Kennedy.

The punch is not a mint product and the coin has no specific numismatic value. Below are some of the comparisons that were on the card that accompanied the cent:

The names Lincoln and Kennedy each contain seven letters.

Both were particularly concerned with civil rights.

Both wives lost their children while living in the White House.

Both Presidents were shot on a Friday.

Both were shot in the head.

Both were assassinated by Southerner.

Both were succeeded by Southerners.

Both successors were named Johnson.

Both assassins were known by their three names. Both names comprise fifteen letters.

Booth and Oswald were both assassinated before their trials. 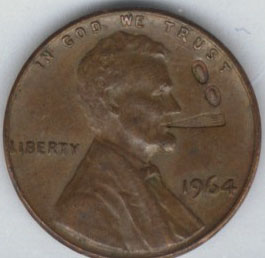 6 years ago Coins in GeneralCounterfeit/Fakes0