Morgan Silver Dollars are probably the most popular coin collected by United States collectors. But this large coin, modeled after the crown size coins of Europe, has a checkered past. The coin’s birth came not from the necessities of commerce but because of the political power of the owners of the American western silver mines. 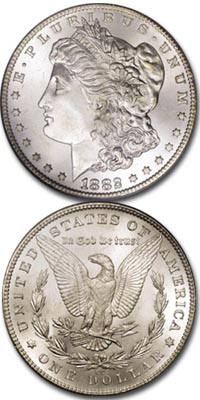 Nineteenth Century Europe and especially the German Empire under the rule of Bismarck favored a gold standard and placed huge amounts of silver on the market. This event coupled with the discovery of huge silver resources in the Nevada Territory, such as the Comstock Lode, placed enormous pressure on silver prices. In order to prop up silver prices, the silver miners cajoled the U.S. government into buying their silver and manufacturing silver dollars.

Under the leadership of U.S. Representative Richard P. “Silver Dick” Bland (Dem -Mo), who spread a bit of silver around courtesy of the Western miners, the U.S. Congress passed the “Law of 1878” which forced the United States Treasury into purchasing domestic silver (from the Western miners) and only for the purpose of striking dollar coins. These coins were at first known as “Bland dollars” and were heavier than 2 halves, 4 quarters or 10 dimes. Americans in that era, at least those living in the eastern United States rarely saw or spent silver dollar and many millions of these coins were stored in government vaults. After 1892 these coins were often euphemistically referred to as “Daddy Dollars” most probably because they were the folly of their parents.

In spite of taking huge amounts of silver off the market, by 1890 the price of silver was still falling. The worse of the story was about to unfold. Under similar political pressure Congress passed the “Sherman Silver Purchase Act” which forced the Treasury into purchasing even greater amounts of silver to strike silver dollars. This time, the silver miners were paid in Treasury notes payable in gold, as stipulated in the Act. The miners were able to virtually wipe out the Treasury’s gold supply while millions of silver dollars languished in giant government vaults.

Though the United States was on a bimetal standard, the rest of the world was on a gold standard. The Treasury’s lack of gold was bringing it to the brink of defaulting on its international obligations. The ensuing panic caused a crash in the Stock market, massive bank failures and with it, the loss of many people’s jobs and life savings. In 1893, an emergency session of Congress ended the Sherman Act.

Dollar strikings were smaller after the end of the Sherman Act (one of the main reasons that dollars dated 1893 are scarce today). The Act of 1898 allowed that dollars would be struck until the supply of silver under the previous acts became exhausted – the primary reason that the striking of silver dollars ended in 1904.

Though the politics of the Dollars of 1878 was ugly, the dollar coin, fortunately for today’s collectors, is a work of art. Mint director Linderman made a perfect choice in hiring George T. Morgan as assistant engraver. His design for the “Bland” dollar was approved the same day that the silver dollar bill of 1878 was passed.

Morgan needed a model for his Miss Liberty and found it in 18 year old, Philadelphia schoolteacher, Miss Anna Willess Williams. Morgan, obviously taken with Miss Williams charms, he persuaded her to become his model which she did, albeit reluctantly, and she sat for him under the eye of his friend, the famous painter Thomas Eakins.

Secrecy was paramount. Women were scorned for any enterprising activities outside of child bearing and teaching. Morgan represented to all that asked, that the head of Liberty on the dollar was inspired by a classic Greek figure. And classic Miss Williams was. She was described by Morgan to have blond hair and blue eyes and a wonderful Grecian profile.

The press initiated the search for the “Silver Dollar Girl” and in 1879 a Philadelphia reporter revealed Miss Williams’ secret. The identification of Miss Williams as the girl on the silver dollar brought her unwanted fame as well as offers of theatrical engagements and a great deal of mail. She rejected them in favor of a teaching position at the House of Refuge. In 1891 she took a job teaching kindergarten philosophy at the Girls’ Normal School.

The announcement that the “Goddess of Liberty” was engaged to be married brought her into the public eye once more. Possibly all the publicity was too much and her marriage never took place. She continued her career in education and became the Supervisor of Philadelphia’s Kindergarten schools. She retired in December of 1925 after a debilitating fall and on April 17, 1926 Anna Williams’ life was ended by a stroke.

The American Numismatic Association Journal, “The Numismatist” reported her passing in May of 1926:

“An obituary told of a Philadelphia lady whose portrait had been reproduced hundreds of millions of times: ‘Miss Anna W. Williams, of Philadelphia, a retired public school teacher, whose profile was used in preparing the design of the standard silver dollar in 1878, died in her native city on April 17. Death was due to apoplexy, induced by a fall she sustained last December and she had been confined to her bed since.”