Mario M. asks: Can you please identify this coin? 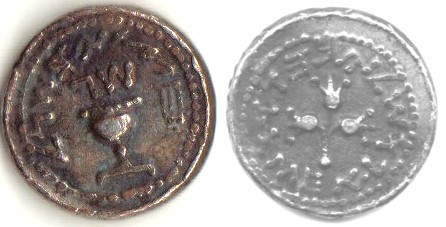 Judea fought both actively and passively against the domination of Rome in the period from about 70 BCE to 70 CE. Even the Christ story is a component of the narrative of Jewish Independence. By the year 66 CE (AD) a second active war broke out against Rome ending in a crushing defeat for the Jewish rebels at Masada.

The coin is described as following:

A chalice, with nine pearls on rim; above the chalice is the date In Hebrew, ” Year 4″, the Hebrew inscription ” shekel of Israel”, around. The reverse shows a stem with three fruit, probably pomegranates, “Jerusalem the holy”, around. Value Range: $2,500 +