Is a 1974 aluminum cent worth anything?

Due to a rise in copper prices in 1973 the mint resolved to do away with copper cents. 1.5 million aluminum cents dated 1974 were produced by the Philadelphia Mint. Intense opposition by the vending machine industry caused Congress to change its mind. All the aluminum cents were ordered to be recalled, counted and melted. None were released to the public. Only 12 examples remain unaccounted for, not counting one example in the Smithsonian. Several Congressmen and other government officials who were recipients of this experimental issue either claimed the pieces were lost or refused to return them.

If one of these coins was offered for public sale the government would most likely confiscate it, as its legal existence is questionable. Any surviving pieces must be melted by law. Even a sale outside the United States might not work if you follow the precedent of the 1933 St. Gaudens $20. That coin was removed from the King Farouk sale in Egypt in 1950 and recently, another (or the same) example surfaced and caused great legal grief for the owners.

There certainly is contradiction in government policy. Why is it legal to own 1913 Liberty nickel, a coin made surreptitiously by a mint employee, but a 1974 aluminum cent, made officially, is outlawed? 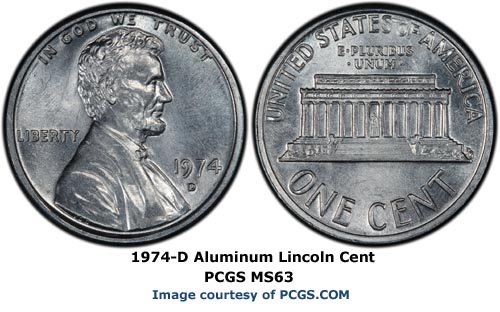