When the first Europeans began to settle in America during the 1500s, there was little use for coins. Where would you spend them in a complete wilderness? Coins meant nothing to the native people, yet the Europeans found that they needed to trade with them in order to survive, particularly during winter. Whites soon adopted the native practice of exchanging wampum (small clamshells fashioned into beads) for food, animal skins and other necessities. Another highly prized commodity, especially in Europe itself, was a plant native to America called tobacco. Both items were so commonly exchanged that the English colonies of the Atlantic coast actually passed laws regulating their values by weight or by count. 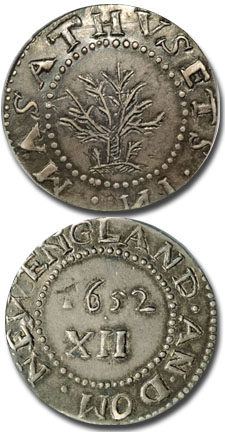 The simple economy of the early colonists eventually gave way to a society that resembled the cities and towns they’d left behind in Europe. With craftsmen and merchants establishing shops in villages up and down the Atlantic coast, the need for a more sophisticated medium of exchange demanded that coins be made available.

Most of the American colonies were ruled by England, and their governments were run in accordance with charters granted by England’s king. While some of these charters permitted the colonial governments to manufacture coins, most did not. The first English colony to challenge this prohibition was the Massachusetts Bay Colony. While England was temporarily without a king (due to the old one having lost his head!), Massachusetts set up its own mint in the city of Boston in 1652.

The Massachusetts Bay Colony’s mint at Boston was run by John Hull, assisted by Robert Saunderson. Its output consisted mostly of silver shillings, coins valued at twelve pence. The Massachusetts Mint later produced smaller silver coins valued at six pence, three pence and two pence. Except for the twopence pieces, which were dated 1662, all of the coins minted at Boston carried the date 1652. The colonists had to do this, since a new English king had come to the throne in 1660, and he was angry that his exclusive right to coin money had been violated. The colonists successfully maintained their deception that all of the silver pieces had been minted in 1652 by continuing to use that date for thirty years.

The mint’s first silver shillings bore simply the letters NE (for New England) on the obverse and the values XII (12 in Roman numerals), VI (6) or III (3) on the reverse. Easily counterfeited or clipped, these coins were quickly replaced by ones featuring a tree on their obverse. Three styles of trees were used over the thirty years of production: a willow (1652-60), an oak (1660-67) and, most familiar of all, a pine (1667-82).

In Maryland, Cecil Calvert contracted with England’s Royal Mint to produce silver coins valued respectively at one shilling, six pence and four pence. These carried no date, but they were made around 1659, during the Commonwealth period when England had no king and was ruled by Parliament. The number minted is unknown, and they evidently circulated only in the Maryland Colony for just a few years. All are rare and highly sought by collectors today.

Also issued in Maryland were the silver threepence, sixpence and shilling pieces struck by Annapolis silversmith John Chalmers. The largest and smallest denominations feature clasped hands on their obverse, while the six-pence displays a star within a wreath for its obverse and the clasped hands on the reverse. The reverse of the threepence features a branch encirled by a wreath. The most often seen variety of shilling shows two doves tugging on opposite ends of a either a worm or a serpent, depending on one’s interpretation. Though scarce, these coins are found often enough to be collectable.

Connecticut had an advantage over the other colonies, because it possessed copper mines. Outside the town of Granby, Dr. Samuel Higley created his own mint from scratch. He smelted the raw ore himself and made his own dies for the minting of copper threepence coins dated either 1737 or 1739. The principal devices were a stag seen in profile on the obverse and either three hammers or a single axe on the reverse. Higley’s coins proved quite successful locally, though by English standards they were underweight. When found today, these very rare coins are almost always well worn, and this proves that they circulated for many years.

In New Jersey, the colonists used coins imported from Ireland during the 1680s. These copper pieces were made a legal tender by the General Assembly in May of 1682. They came in two sizes, the larger ones being valued at one-half penny and the smaller coins at a farthing, or one-quarter penny. One side of these coins shows a seated figure of a king playing a harp (symbollic of Ireland), and the other side shows Saint Patrick. These coppers are among the more available coins of the American colonial period.

Among the most rare and obscure colonial pieces are the brass and pewter tokens issued by Francis Lovelace, governor of New York from 1668 to 1673. The New Yorke token is undated but is believed to date from this period. Its obverse shows Cupid chasing after Psyche, who wears butterfly wings. The reverse features the Lovelace Family arms, which is dominated by an eagle. Probably intended to pass as farthings, these extremely rare tokens were likely made in Bristol, England.

In 1688, Richard Holt received a royal patent to manufacture tokens for use in the American colonies. Made of tin, these tokens were valued at 1/24 real. (The real was a Spanish unit of value, and the coins of Spain’s American colonies were then widely used throughout the New World.) The obverse shows England’s King Charles II astride his horse, while the reverse displays the armorial shields of England, Scotland, Ireland and Wales linked by a chain. Very little is known of these rare pieces, such as where and for how long they actually circulated.

Another individual who received royal permission to make coins for Ireland and for the American colonies was William Wood. Both issues of his copper coins, which are dated 1722, 1723 and 1724, show a portrait of King George I on their common obverse. The American coins feature an English rose on their reverse, while the Irish pieces display a seated figure of the goddess Hibernia (Latin for Ireland) seated beside a harp. Though officially valued at two pence, one penny and one-half penny, respectively, Wood’s coins were very underweight and were largely rejected by the Irish. As a result, the Irish issues were also shipped to America, since the American colonists had too few coins to complain about their quality. Even so, they proved to be just as unpopular here as they had been in Ireland.

Another series of Irish coins which found their way to the American colonies were the Voce Populi coppers, so called because of their obverse legend, which in Latin means “By the voice of the people.” Dated 1760, several varieties of farthings and halfpennies are known. These were created by a Mr. Roche of Dublin. Their obverse features a laureate bust of King George II, while the reverse design is a seated figure of Hibernia with a harp. Exactly where and when these circulated in America is uncertain, but they are highly collectable.

Tokens honoring Sir William Pitt, who defended the American colonists against the unpopular Stamp Act of 1765, were made in both farthing and halfpenny sizes bearing the date 1766. A bust of Sir William appears on the obverse, while the reverse features a merchant ship under full sale, which is identified as AMERICA. The Pitt Tokens are quite collectable and serve as important historic relics.

Of all England’s American colonies, Virginia came closest to realizing a useful coinage from the Mother Country, but it simply came too late. In 1773, thousands of copper halfpennies were minted in London for shipment to Virginia. These attractive coins carry the portrait of King George III on their obverse and the royal arms of Great Britain on their reverse. Despite all indications that these coins would be successful, the many surviving examples show little or no evidence of circulation. By the time that the coins arrived in Virginia, Americans had already begun their struggle for independence. Coins carrying the portrait of England’s king were out of favor, and this issue was not widely distributed. The Virginia halfpennies are among the most common of colonial era coins, and they’re a perennial favorite with American collectors.

With the exception some of the types described above, there are few uniquely American coins from the colonial era. It may be seen from these mostly unsuccessful attempts at coinage that the needs of the American colonists were not being met. This attitude of disregard on the part of England toward its countrymen overseas would eventually lead to rebellion and American independence.

6 years ago The History of U.S. CoinsColonial America0