Bob & Jeanine R. ask: Could you give me any information about this penny with the word “IN” missing in the motto? I would appreciate any help with this as I am a very novice coin collector with much to learn. Thank You!

There are two basic classes of coin errors: Die errors and Mechanical errors: Die Errors are duplicated on every coin that is struck from that die. A good example is the 1955 Doubled Die cent, caused by a hub rotation when an additional impression of the master hub turned slightly when it was applied. 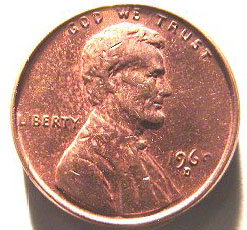 All coins coming from die errors are identical. Only wear or damage to the die changes the resulting coins. The 1937D 3-legged Buffalo nickel or the 1922 plain cent are good examples.

Mechanical errors include clipped planchets, multiple strikings, blank planchets, off centers, broadstrikes (coins struck outside of the retaining collar), brockage (caused by a coin sticking to the die and striking subsequent blanks with the stuck coin), coins struck on the wrong planchet (for example, a quarter struck on a dime blank) and filled die errors.

The filled die error is a good place to start. Dies are a negative image in relief. When a blank is struck with the obverse and reverse die the metal flows in to the recesses of the die and creates the image on the blank. If dirt or debris fill the recesses the image will not be imparted onto the die.

On your coin you can see a filled die problem on the “9” in the date. I’m not sure about the missing “IN” being a filled die error. I’d need a higher resolution image to see, but because there is no trace at all of the word “IN” there is a good chance that it was removed from the coin with a small tool called a graver. By “chasing” (moving metal) around the altered area it looks as if it was never there.