Stephen H. writes: I found a 1812 penny. The front side has a lion and reads Rolling Hills at Walthamstown One Penny 1812. The back says British Copper Company Smelting Works At Landore. Is this coin worth anything? Thanks for your help.

Paul H. writes: Can you help me. I have recently found this coin dated 1788. On the edge of the coin it states, Liverpool or Anglesey on demand in London. On one face, “We promise to pay the bearer one penny 1788” and in the center “PMCo” on the other face there is a picture of a monk with ivy around the outer edge of the face. I’ve attached an image of the coin.

An acute coin shortage developed in England in the late 18th and early 19th century. Between 1790 and about 1815, the British government failed to mint a sufficient number of coins for commerce. There were political and economic reasons for this problem but the main cause can be traced to the erratic rule of King George III. The scarce coins were the “bread and butter” farthings, half-pennies and pennies that were so important for small sales and to make change. The slack was taken up by private issuers.

A whole body of tokens became familiar in England during this period. Most of them were made at foundries where the skills necessary to make metal blanks existed. They soon were in widespread use as a medium for small change. As well as money, these tokens often were used as a vehicle for advertising or political messages. Their themes ran the gamut from simple “good-fors” to political statements and satire. There was no official design or constraints. Monetary authorities turned a blind eye to this practice although it was essentially counterfeiting. The government was in dire straits and was secretly grateful that this bit of ingenuity was keeping the economy afloat.

The majority of these interesting pieces were cataloged by James Condor in his book first published in 1798. Condor organized and cataloged all the emergency tokens known at that time. Later catalogs by Dalton and Hamer updated and added to the body of knowledge about these interesting pieces. Collecting these tokens became a popular pursuit and they are still enthusiastically collected today. They are affectionately called “Condor Tokens” after the author of the first catalog. 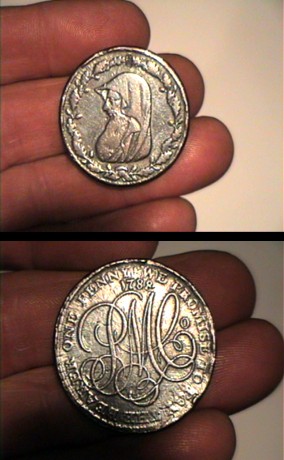 The 1812 token was minted in Essex England, shows a lion standing on a line, his head facing front and below (in exergue), ONE PENNY 1812. ROLLING HILLS AT WALTHAMSTOW is around. The reverse shows BRITISH COPPER COMPANY in a wreath with SMELTING WORKS AT LANDORE around. Value depends on condition. Average Circulated pieces US$15 -$25. Uncirculated examples: US$90-$150.

The 1788 token is from Angelsey. (See image to right). These particular tokens first appeared in 1787 and were made at the Parys Mines. More than 250 tons of copper pennies and 50 tons of copper half pennies were minted making this series fairly common.The design shows a Druid’s head in a cowl on the obverse and a monogram, “PM Co”, on the reverse. Value Range: $15-$25. Silver proofs exist as well as gilt copper: Range for those $150 -$350.