Quarters have been minted in the United States since 1796. There are eight different design types but only three are usually encountered by the Public: “Barber” quarters, Standing Liberty quarters and Washington quarters. 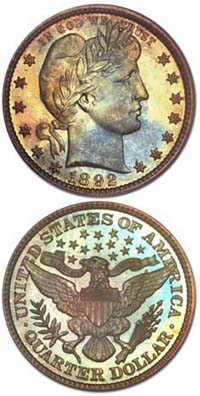 The Barber quarter, named after its designer, Charles Barber, has a male representation of Liberty facing to the right. It was first minted in 1892, and continued to be made until 1916. It was followed by the Standing Liberty design made from 1916 until 1930. This beautiful coin features a full-length figure of Liberty.

Standing Liberty Quarters are usually found very worn, and are worth a small premium over common bullion related quarters. (remember these are for worn pieces AG-good grade).

Any quarter dated 1964 or earlier will be worth at least its silver value, .18084 troy oz pure silver (gross weight is 6.25 grams). Rare dates in the series include the 1932-D and S and these are worth, in the lowest grades, about $125 each but   considerably more in higher grades.

Quarters  minted form 1965 to the present are a copper-nickel alloy (gross weight 5.67 grams) and currently have no numismatic premium.

In 1975 and 1976, the Bicentennial Washington quarter was made which features the dual date 1776-1976. Millions of these coins were made for general circulation. They are currently only worth face value.

In 1999, the United States Mint began the 50 State Quarters program, a circulating commemorative coin series featuring a reworked Washington portrait obverse and a different, unique reverse for each of the 50 States. The coins are issued in the same order that the states joined the Union. The State Quarter series has become the most popular commemorative coin program in U.S. history, with the U.S. Mint estimating that over 100 million people now actively or casually collect the series. Originally scheduled to last through 2008, the program was extended by legislation to include the District of Columbia, the Commonwealths of Puerto Rico and the Northern Mariana Islands, and the U.S. territories of Guam, the U.S. Virgin Islands and American Samoa.