Jack writes: Doc, Found an old coin (1913) and I have an image of it but I don’t know the country of origin (I’m guessing Russia or Poland?) as there is no English alphabet involved. The only number on it is a “50” 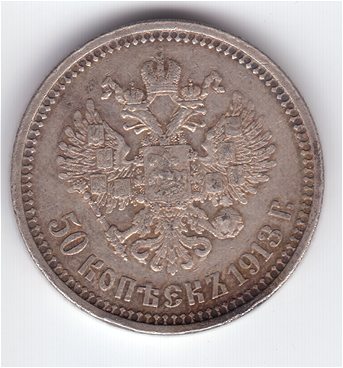 You have a 1913 Russia (Empire) 50 Kopeks, also known as a “Poltina”. The obverse features the head of Czar Nicholas II (1894-1917), the reverse shows a crowned two-headed eagle The date, mintmaster’s initials and denomination is below. There is no mint mark.

Your coin grades about Very Fine with some light edge damage. Approximate collector value: US $15.

Jan 1, 2014coindoc
1931 International Harvester Centennial of the Reaper medalWhat does the "d" in ÂŁ/s/d mean?