Russ writes: I have several interesting coins acquired in Venezuela. I believe they are known as “emergency money”. They are 1/2 reals. The dates are 1813 through 1817. A lion and castle appear on the coins. Also: monedas de cobre realistas…F VII. They seem to be thin copper and poorly struck. Any info would be helpful. Any idea of there value? 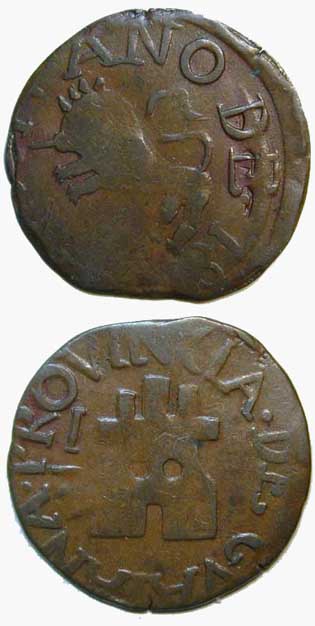 The coins you are referring to are from the Province of Guayana in Venezuela produced during the War of Independence from Spain. This royalist copper coinage was produced under the act of October 26, 1813. The need for emergency money was caused by the province being cut off from other Spanish forces. They were struck in 1/4 and 1/2 real denominations from 1813-1817.

The coins show a crude castle on one side and a Lion on the other, a reference to Castle and Leon in Spain. Most coins show only a partial date and some have no date at all. Full date pieces receive a market premium. The legend VII ANO refers to the 7th year of the war (1817). Genuine pieces do not show the legend: “monedas de cobre realistas” (copper coins of the royalists), these are museum copies.

Grade, variety and the amount of the date showing are important factors that determine value. Approximate range for Province of Guayana 1/2 reales: $2 – $350.