Tom D. I’ve attached a photo of a coin that I am very eager to identify and find out its approximate value. Thanks, Coin Doc. 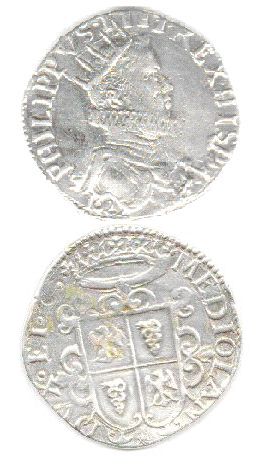 You have a 1622 Italian States (Milan) silver Ducatone. Milan was a dependency of the Spanish Crown from 1535 -1714. (Austria, and then France under Napoleon in 1796 ruled until it became part of the Italian Republic in 1802).

The coin shows a ruffled and crowned bust of Philip IV. The Latin legend around, PHILIPPVS IIII REX.HISPA. (Philip IV King of Spain). The date 1622 is below the bust. The reverse shows the crowned arms of Milan. The Latin Legend, DUX ET C. MEDIOLAN (Duke and Count of Milan). From your image, the coin appears to be in about VF condition and would have an approximate market value between $150 -$200.